This record-contesting tall daffodil measured in at 1.36m and was grown in Maureen Howard's mum's garden in Country Down, Northern Ireland. Photo: Maureen Howard
Next time you read this column it will be spring. That's despite it having already been spring for the past six weeks.

There's a couple of very spring-like photos attached to today's column. They were taken by my ODT room-mate Maureen Howard of a massive daffodil in her mum's garden in County Down, Northern Ireland. 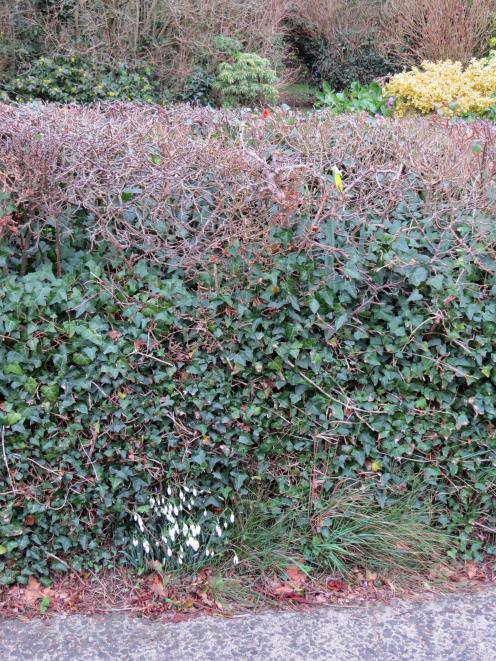 You can just see the unopened head of the daffodil poking through the hedge. Photo: Maureen Howard
This 1.36-metre tall beauty had to contend with a thick hawthorn and ivy hedge, but somehow squeezed and edged its way through all that, and managed to pop its head out to soak up the sun and bloom. I wonder if there's a lesson in there for us about never giving up?

We had a great time with your best autumn photos, so it only seems right to ask you to send in your top spring pictures now.

But rather than just photographs of beds of bulbs, pretty as they will no doubt be, I'm especially interested in spring images with a bit of a twist - whether that be a bunch of snowdrops flowering under a tree still covered with autumn leaves, or unusual colours, or animals interacting with the daffodils.

Put your thinking caps on! And please start sending your photos to the email address above.

It's amazing what you find when you're looking for something else. Ruth Porteous of Warrington takes up the story of her discovery the other day.

"I was recently working on our family history and, in searching through what appears to be an old accounts ledger, I found these labels.

"I have looked on Google and can find nothing that might give me more information about this enterprise - Cowan & Co rabbit exporters. I wonder if any of your readers may be able to enlighten me?

"I've heard stories that during the 1940s my late father-in-law would trap rabbits and sell the carcasses to an outlet in Lower Stuart St, somewhere opposite the Dunedin Courthouse. Apparently, customers would be lined up waiting for him to arrive on a Wednesday with the rabbit meat.

Ruth Porteous of Warrington came across this Cowan& Co label while researching her family history. Are we missing out on a valuable export business? Photo: Ruth Porteous
"His sons were expected to help with this trapping process and their `payment' was by way of stretching and drying the skins, then selling them to a skin buyer.

"It is a pity that at this time of a substantial rabbit population, an enterprising individual couldn't set up a business of this type again, as a way of reducing the population.

"I guess in this age of everything being subject to health and safety regulations, it wouldn't be acceptable. The skins could also be used in a number of ways."

Can anyone shed some light on Cowan & Co? And does anyone have any thoughts on rabbit farming?

Ann Aitken writes again, this time with memories of snow at Labour Weekend in October 1975.

"It was a cold day so I decided to make soup for lunch, as my husband usually came home for a break. I had a nagging thought several times during the day about taking some soup to an old lady whose sister was in hospital and whom she had asked me to visit. I had agreed to, but kept putting it off.

"After lunch I put smallest daughter into my baby backpack and the daughter who liked to run away was strapped into the pushchair. Soup was safely stored in an ice-cream pottle as we set off walking the few blocks to her house.

"She did not answer the door, so I went round the back and found her lying on the ground next to the rubbish bin. She was extremely cold and had been stuck there for several hours and could not get up by herself. It was just starting to snow.

"I was in no fit state to help her. She refused an ambulance, so I went out to the street looking for helpers. Several students offered to help her inside, which we managed to do.

"I stayed a while to make sure she was OK - she drank all the soup straight from the pottle and thanked me profusely. I went home realising that the nagging thoughts were of divine origin."