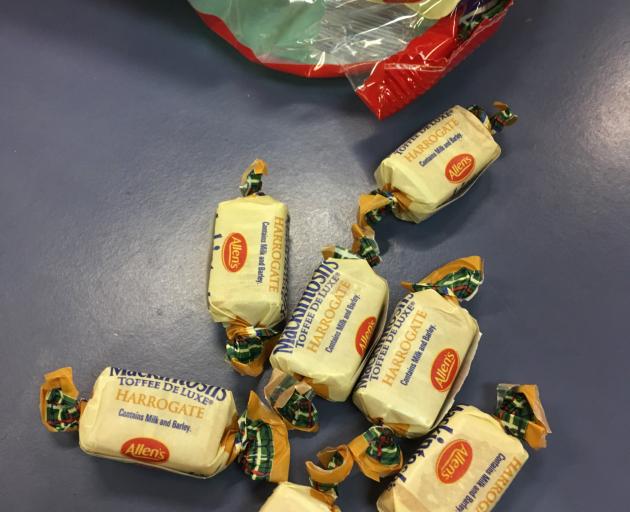 The proof is in the pudding, or the eating. Here's more evidence that Harrogate toffees still exist - there were seven of them in the bag of Mackintosh's enjoyed by ODT subeditors (and, vicariously by their dentists) on Wednesday evening. PHOTO: PAUL GORMAN
September 4, 2010 quake

A few more recollections of how the 7.1-magnitude Canterbury earthquake affected people in Otago.

Robert Buxton, of Dunedin, was downstairs in his Marine Pde home at Macandrew Bay when the quake hit.

"I was woken by the noise of the earthquake as it approached under the harbour. The shaking was mild, but went on for so long that I wondered if it might intensify. When it finished I went back to sleep, expecting to hear that it was an earthquake from the Main Divide.

"I had a similar experience in Marine Pde in Eastbourne, Wellington, in the early '90s, where the sound of an approaching earthquake under the harbour woke me first, although that one was a single violent 0.5m horizontal shake - quite scary.

"I was in Christchurch for the February 2011 earthquake and the immediate aftershocks when, although you might hear something coming, you never knew what type of shaking was going to occur, and sometimes there were sounds with no shaking. Also, there could be shaking with no warning sounds. That does put you on tenterhooks.

"I have met a few others from Macandrew Bay who say they heard the Canterbury earthquake, as well as the Christchurch earthquake, approaching under the harbour." 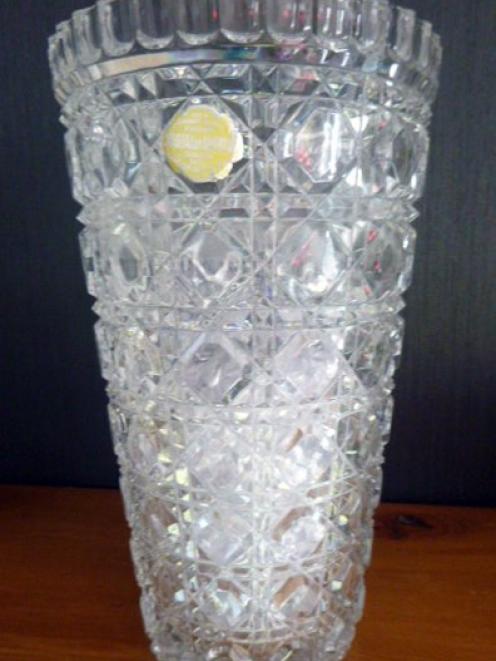 A crystal vase won by Sally Grant's father, Ron, at the New Zealand and South Seas Exhibition in Dunedin in 1925-26. PHOTO: SALLY GRANT
Lesley Vlietstra had a particularly wobbly experience during the September quake.

"I was asleep on a waterbed in Mosgiel with a cat asleep on the end of it.

"When the quake struck, the house creaked badly and the water in the bladder of the bed washed from side-to-side.

"I got up to check damage and, when I returned to bed, the water was still moving quite strongly. The cat remained asleep through the whole experience."

Thanks for the interesting stories coming in about Dunedin's New Zealand and South Seas Exhibition in 1925-26.

Ted Richardson sent in the photo of a souvenir glass that belonged to his mother, Lorna.

"She would have been about 10 years old when the family visited the exhibition from Balclutha.

"There is an etching of the pavilion which is very faint, as you can see. My mother's name was inscribed on the other side. As you can imagine it is rather fragile, being 92 years old.

Sally Grant, of Waikouaiti, also passes on some memories and an exhibition photo.

"My dad, Ron Grant, would have been about 8 years old. He walked up to the large statue at the entrance to the Fijian display and put his hand in the man's hand.

"To his great surprise, the `statue' squeezed his hand! Dad took off and said he was too scared to go back and look at the display.

"All was not bad though - here is a photo of the crystal vase he won at a sideshow."

Clarke Isaacs, of Sunshine, says he was a "naughty 7-year-old" when the city was buried in the Big Snow. 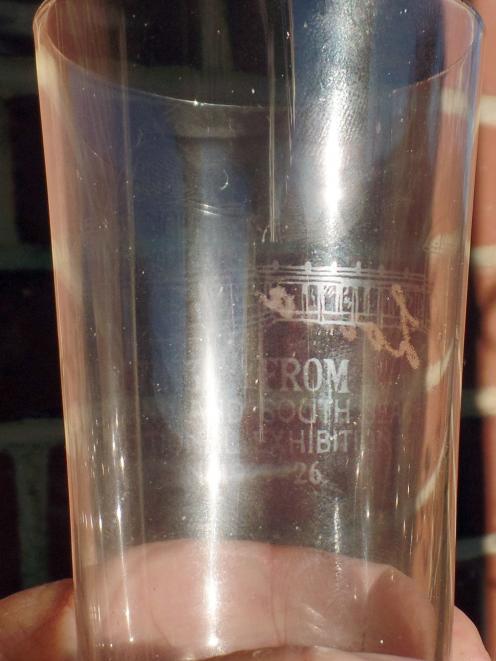 More goodies from the event, this time a souvenir glass with an etching of the exhibition pavilion, given to Ted Richardson's mother, Lorna. PHOTO: TED RICHARDSON
"A pal and I stationed ourselves behind the stone wall at the foot of Tennyson St, overlooking Princes St. We shared that spot with a World War 1 artillery piece.

"After throwing snowballs on to unsuspecting walkers in Princes St, we would duck down behind the wall. We indulged in this unsavoury exercise for quite a while."

It sounds like a lot of fun actually, Clarke. I'm not totally convinced that, as a "naughty not-7-year-old", you are at all repentant about it!

Diana Kearns, of Maori Hill, is still in awe of the lengths her mother went to for the family during the snowfall.

"I was not born until many years after the big snow of 1939, but I often heard my parents talking about it and it must have been really something. They always said how very deep it was and how it lasted for a long time, more or less paralysing the city.

"My older brother was about 4 at the time and desperately wanted to go out to play in the snow with his friends. But he had no gumboots.

"My mother said he was not a child to ask for much, and she made up her mind to buy him a pair - somehow.

"So, with the help of a broom for support and leaving her children with an aunt who lived nearby, she walked from the Eglinton Rd end of Neidpath Rd where we lived, all the way down Stafford St in the deep snow to Woolworths in Princes St, to purchase a pair for him.

"Then she walked all the way back up the hills, ploughing her way slowly through the snow, and she said it took her hours.

"When she got home, she discovered that they had given her the right size gumboots, but they were both for left feet!"

In some ways, Diana, it's good to hear things like that happened back then, too.

Sorry, page 2 will be filled with an assortment of other interesting stories on Monday. Back to normal on Tuesday.