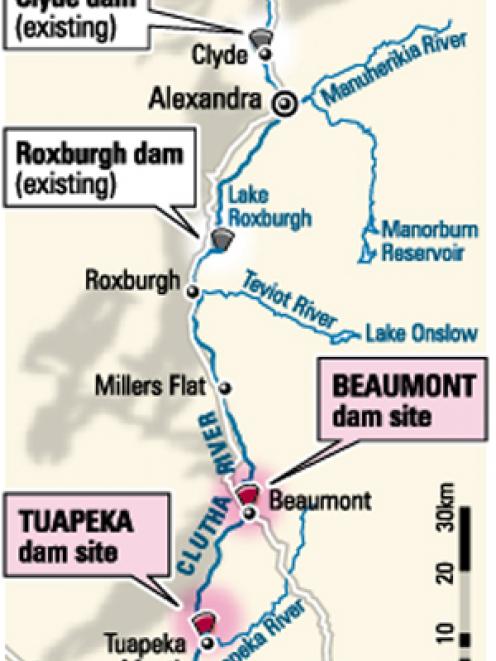 Decades-old plans for up to four hydro-electric projects on the Clutha River are being dusted off by Contact Energy, which plans to spend the rest of 2009 hearing what the public thinks about the prospects of dams dotting the landscape throughout Central and South Otago.

While the power company yesterday stressed it was not committing to building any dams on the river, its move to formally revisit plans for hydro-electric projects at Queensberry, Luggate, Beaumont and Tuapeka Mouth, and the appointment of a project manager, suggests it is seriously considering a major investment along the river.

Based on figures obtained by the Otago Daily Times, all four projects have the combined potential to supply power to nearly 400,000 households.

Their construction would inject hundreds of millions of dollars into the Otago economy.

The plans, a new website and the first talks with communities will be launched within the next 10 days, but most details are being kept secret for now.

Detailed plans of all four projects, once mooted by Contact's predecessor, ECNZ (Electricity Corporation of New Zealand), will be posted on a website next month and the public will, for the first time in more than 20 years, get a chance to respond to the idea of major dams being constructed on the river.

Contact media spokesman Jonathan Hill and its Clyde-based generation project manager, Neil Gillespie, said the company did not have specific plans for hydro-generation projects on the Clutha.

Contact was using historic plans as a tool to gauge public opinion about hydro development along the river.

"We've got various options we inherited [from ECNZ] and the next step for us is to put that information into a public place and invite the community to have a look at them and tell us what they think about them," Mr Hill said.

Contact wanted to understand what people in the communities that might be affected and in the wider Otago area viewed as the impacts and benefits of any, or all, of the projects going ahead.

"This is just a process for us just better trying to understand what people think.

We can't understand these projects unless we understand how the community feels about them . . . that's the whole point of this exercise."

Mr Hill said this "escalation of our conversation" was expected to take the rest of this year, by which time it might know if one or more "are a goer".

Mr Gillespie said Contact was not unveiling any plans for any particular project.

"There are a number of options out there and we will present them and talk to the community about them," he said.

Mr Gillespie said those were widely-known options, which the company would use in consultation with communities along the Clutha to better understand public opinion and any issues surrounding such development.

Consultation, which would likely involve communication through a website, was still likely to take about 12 months, he said.

Contact then could determine whether specific projects could be looked into in depth.

"This is just the start of that process."

Mr Hill said depending on the public feedback, Contact might consider other forums for communication, including public meetings.

Otago mayors met Contact officials late last year to be briefed on how public consultation should be carried out.

A Friends of Beaumont group spokesman could not be reached yesterday but the group, which took the fight to ECNZ over its Tuapeka Mouth and Beaumont projects in the 1990s, has said previously it would again strongly oppose any dam on its patch.

A report prepared for the Electricity Commission in November 2007, obtained by the Otago Daily Times, reveals the four Clutha River dam projects are viewed as being some of the most economically viable in the country.

The report identified 18 potential schemes but concluded only nine would make the grade.