Gillespie joining Lepper at the helm 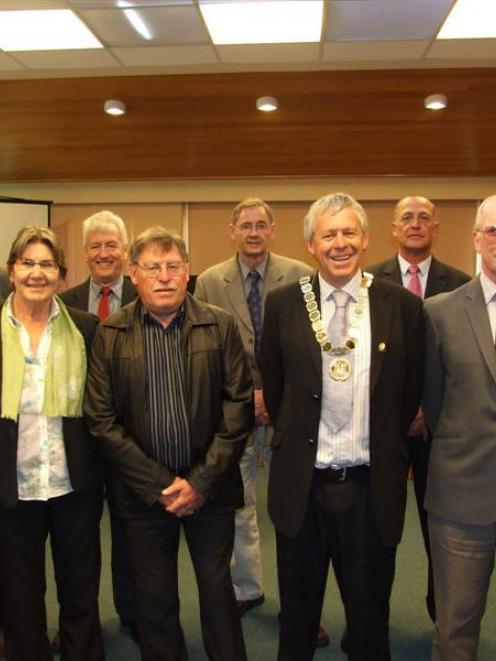 Mayor Tony Lepper was sworn in and then nominated Cr Neil Gillespie, of Cromwell, as deputy mayor.

Mr Gillespie was appointed unopposed and said he was looking forward to the new challenge.

"It's going to be an interesting three years."

He has been a district councillor for nine years and was elected to the Cromwell Community Board in 1998, serving as board chairman since 2001.

Contact has revived plans for hydro-electric dams on the Clutha river and has sought feedback on four main options, proposing dams at Tuapeka Mouth, Queensberry, Luggate and Beaumont, costing between $300 million and $1.5 billion.

A decision on Contact's preferred option is unlikely to be made until next year.

When asked by the Otago Daily Times yesterday whether there was any conflict between his work at Contact and his new role of deputy mayor, Mr Gillespie said he did not believe there was.

"It's no different to any other councillor or board member. If an issue comes up at a meeting from your 'other life', which is a conflict of interest, you declare that conflict, refrain from taking part in the discussion and abstain from voting.

"In my view, there's no problem. If the question of the hydro dams came up at a meeting, I would declare an interest and act accordingly.

"The last thing I want to do in this role is to compromise that role, with either hat I'm wearing, as a councillor or as an employee of Contact."

Mr Lepper recommended changes to the council's committee structure, which were adopted.

Five main committees will be established with a finance committee the only new one, joining roading, infrastructure, planning and environment and district development.

The committees will meet before the monthly council meeting, as required, and for the first time, all councillors are involved in one or more committee.

"It's important for everyone to get involved in the business of the council, rather than just three or four of the councillors," Mr Lepper said.

The panel which hears resource consent applications will be made up of only three councillors instead of five, to save money, he said.

Mr Lepper paid tribute to the contribution made by former mayor Malcolm Macpherson.

"He spent nine years as mayor and 20 years on the council and played an extremely important part in shaping Central Otago, the place it is, and especially the council.

"I thank him for his contribution to this council and where we are today and we all appreciate the work he did for us."

Councillors were re-elected unopposed, with only one change - Cr Martin McPherson replacing Lynley Claridge, who stood down.