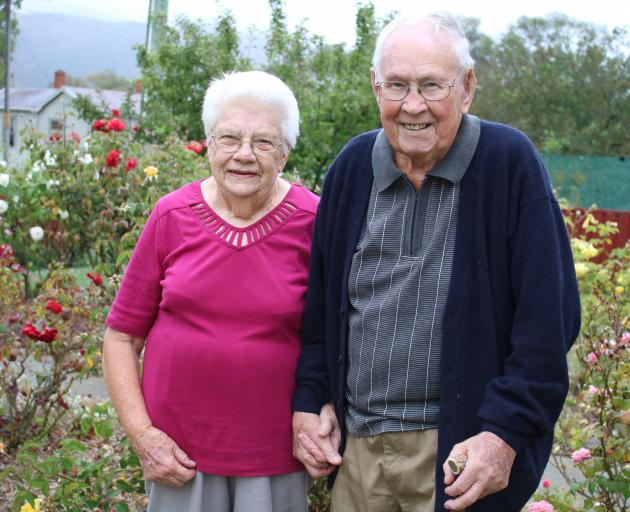 Hakataramea couple Rosemary and Ernie Gilchrist celebrate their 70th wedding anniversary today. PHOTO: KAYLA HODGE
There's nothing quite like having a jug of water thrown at you to dampen a romance - or in this case bring it to life.

Rosemary Gilchrist was working as a junior nurse at Oamaru Hospital, when one of her patients commented about a group of men laughing on the balcony below.

She had the perfect solution to stop the men from causing a ruckus.

"I filled the jug up, threw it down and I just missed him," Mrs Gilchrist (91) said.

Little did she know the man she nearly hit would become her future husband. Today she and Ernie Gilchrist (93) celebrate their 70th wedding anniversary.

Several weeks after the water incident, the couple had another encounter when they met at an Oamaru Scottish dance, and something just clicked between them.

Eighteen months later they were married in Mrs Gilchrist’s home town of Invercargill, in a double wedding with her sister, and then returned to Oamaru.

Mr Gilchrist was a mechanic and service manager at G.T. Gillies for 45 years, while Mrs Gilchrist stayed home and looked after their four children, Robert, Susan, Wendy and Warwick.

There was no secret to their marital success - they had lived an ordinary life and just tried to look after each other, Mrs Gilchrist said.

"We just got on I suppose," she said.

The couple retired to Hakataramea, near Kurow, 33 years ago after Mr Gilchrist had bought the house for his fishing trips.

"It’s such a great spot, great climate and the neighbours are great. They can’t do enough for you," he said.