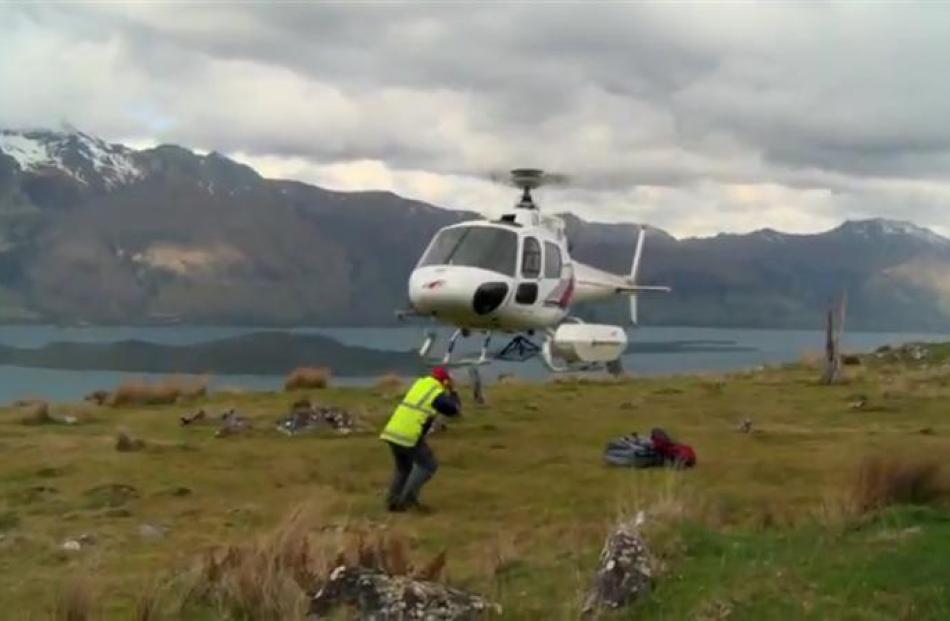 An image from the latest production video of 'The Hobbit'. Photo supplied.

Tantalising glimpses of Otago landscapes used by the film-makers shooting The Hobbit appear in another production video presented by Sir Peter Jackson.

The fifth behind-the-scenes featurette posted online on Christmas Eve reveals the logistics of location shooting for the multimillion-dollar production and how the travelling circus of more than 500 cast and crew members in almost 140 vehicles set off around New Zealand over seven weeks.

"It's been great to get that texture of Middle-earth into the movie after many, many weeks of shooting in the studio," Sir Peter said in the video.

Recognisible Queenstown area shots in the 12-minute video included a helicopter landing near crew members on high country with Pig and Pigeon islands in Lake Wakatipu and the Humboldt Mountains in the background. The Remarkables made an appearance from a distance across the lake.

Cast members were seen sitting on rocks of the Rock and Pillar Ranges near Middlemarch.

A large filming contingent flew into Dunedin in mid-November.

Otago filming occurred in areas including private land near Paradise, beyond Glenorchy, as well as on Treble Cone, in the Matukituki Valley, plus in the Strath Taieri and Maniototo.

More footage of Southern location shooting, including near Te Anau Downs, was anticipated to feature in the sixth production video to be posted online early in the new year.

The video was posted days after the first trailer for The Hobbit: An Unexpected Journey was released. The high definition version of the trailer, depicting Bilbo, Gandalf, the group of dwarves and a cinematic style in keeping with The Lord of the Rings, clocked up more than 11 million views on YouTube in one week.

Meanwhile, New Zealand was hailed as one of the "Top Ten Filming Locations in the Universe" by United States movie magazine P3 Update in its December issue.

New Zealand and Canada were the only two countries individually named in a list which featured the United Kingdom and several American states.

The home-grown film industry looked likely to prosper in the new year with Girl With a Pearl Earring director Peter Webber expected to film The Emperor, with The Hobbit double bill continuing to film and Wellington to host the world premiere in December, plus the Jane Campion-directed and Holly Hunter-starring mini-series Top of the Lake to film in Queenstown and Glenorchy.

The second film, The Hobbit: There and Back Again, is due to be released on December 13, 2013.