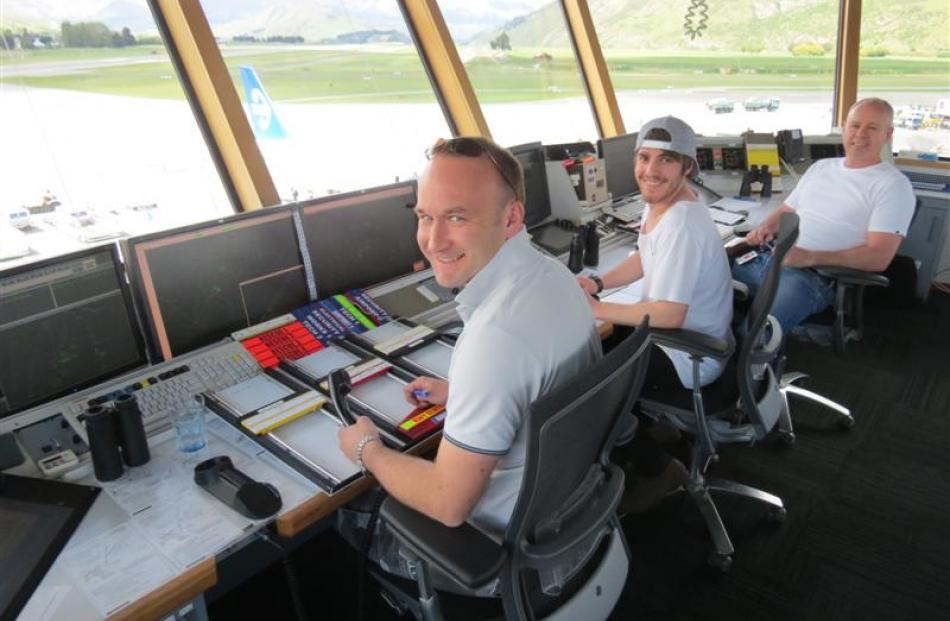 A sharp increase in the number of flights to Queenstown this summer will keep Airways New Zealand staff (from left) air traffic controllers Andrew Turner and Nick Gale and flight service specialist Darryl Palmer and their colleagues in the Queenstown...

A joint marketing campaign by Air New Zealand, Destination Queenstown and Queenstown Airport is telling Aucklanders and people flying into Auckland from overseas they can fly direct to Queenstown almost every two hours this summer.

The promotion is already paying dividends, with a forecast January will post a 17% increase in inbound passengers to the resort, compared with January 2012.

Two large billboards were put up in prime locations at Auckland Airport at the weekend and will remain until the end of this month, in what was described as a first for a Queenstown destination campaign and only possible due to the "strategic alliance" of Queenstown Airport with minor shareholder Auckland Airport.

The billboards say how easy it is to "escape" to Queenstown, with five daily Air New Zealand flights from December to March.

Queenstown Airport Corporation said yesterday the billboards could be seen by an estimated 11 million arriving international and domestic travellers and airport visitors.

"People on these flights won't all be domestic. A lot of our international visitors to Queenstown come on that Auckland to Queenstown flight," airport chief executive Scott Paterson said yesterday.

The fifth daily flight will be an early evening departure from Auckland return, the first twilight arrival to Queenstown from the city and possible due to the longer daylight hours of summer.

"I think the last flight departs back to Auckland at 7pm. This is for summer only, evening flights in daylight, and that's totally within our consent criteria, which is until 10pm, and it's within Civil Aviation rules of flying within daylight.

"We get flights now from Christchurch coming in late."

Asked what difference the extra flights would mean for the Queenstown Lakes district and its main airport, Mr Paterson said Air New Zealand's capacity was expected to increase by 32% on the Queenstown-Auckland route.

The predicted 17% increase in inbound flights across all airlines year-on-year in January stemmed from new scheduled services, he said.

"Air New Zealand have come to the party with additional capacity out of Auckland.