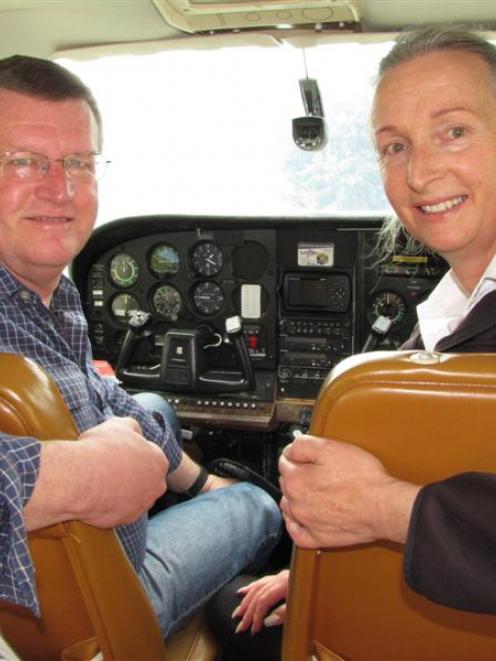 Wakatipu Aero Club acting secretary Ian Webb, operations manager and chief flying instructor Julianne Kramer and fellow members will be celebrating the club's 40th anniversary this month. Photo by James Beech.
The launch pad for hundreds of New Zealand and international aviators will celebrate its 40th anniversary with a reunion of past and present members, at Queenstown Airport, on Friday, November 19.

Veteran pilot Jules Tapper, chairman of the Lakes District Air Rescue Trust, will be the guest speaker at the ticketed function to mark the milestone of the Wakatipu Aero Club, in the terminal building, at 7pm.

Acting secretary Ian Webb said many pilots who trained at the venerable club had gone on to fly commercial airliners, domestically and overseas.

The organisation began when 18 enthusiasts and former air force pilots met in Frankton to form their own recreational flying group on September 24, 1970. Driving-force Bill Mahon was the first president and Jock Freemantle, now behind the Formula One-type Hulme super-car, was vice-president.

The club soon purchased its first Cessna 172 BVP, with the help of a loan from the late Charley Hume, from proceeds of the sale of his farm in Glenorchy.

Today, the Frankton-based flight trainer has 65 members, six aircraft and typically trains about five commercial pilots a year, from beginners up to those completing a commercial pilot's licence.

The club's commercial wing, Air Wakatipu, provides scenic flights to Milford, Fiordland and throughout the Southern Alps and is the other main revenue stream.

"I think the club has changed just as Queenstown has changed," Mr Webb said.

"In the original days, it would have been a small group of dedicated pilots from a small community, with a fairly stable population. Now it's quite a cosmopolitan club, with members born in lots of different countries."

Tickets for the reunion cost $25 and are available from the club, in Lucas Pl.