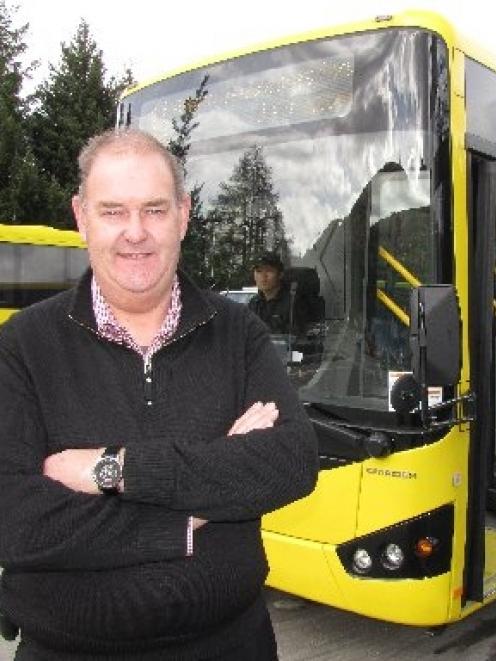 Connectabus owner Ewen McCammon stands beside a new 41-seat Connectabus which entered service this week. Mr McCammon has defended his company's performance from criticisms by some Queenstown Lakes district councillors. Photo by James Beech.
Connectabus has fired back at criticism from a Queenstown Lakes District Council subcommittee this week, saying the council has "hardly ever" promoted public transport itself in 17 years and the Wakatipu bus service is better value than that in most centres.

Connectabus owner Ewen McCammon said yesterday he was "amazed" at reported comments from councillors who called for more marketing of trial bus routes and complained about the price of fares, during the utilities committee meeting on Tuesday.

Mr McCammon said the perception of the community was Connectabus was fully subsidised by local authorities.

However, only a quarter of its budget came from the Otago Regional Council (ORC) and it was allocated for the new links between Queenstown and Arthurs Point, Quail Rise Estate, Kelvin Heights and Lake Hayes Estate.

"We get paid a kilometre rate to service outer areas slightly above cost and ORC gets money that goes through the till," he said.

Mr McCammon said the company was transporting about 1800 passengers a day during the winter months.

Historically, only 27% of passengers were residents and the rest were visitors, which contradicted an opinion voiced by committee member Cr John R.

Wilson that interaction with tourists had been "completely ignored" by the new services.

Mr McCammon responded to the views of Crs Cath Gilmour and Gillian Macleod on the cost of fares.

A journey in Auckland of the distance between Queenstown and Arrowtown cost $7, and that was on a fully subsidised service, he said.

"That applies to anywhere in the system. Sunshine Bay to Remarkables Park costs $6 and the same discounts apply.

"If you buy a five-day pass, exploit it as much as you can. We're looking to put in two-weekly and four-weekly passes as well, in the next couple of months."

Customer take-up for the new links between Queenstown's suburbs had been slow since the trial started in mid-July, Mr McCammon said.

"Buy the right pass that fits your transportation mode.

"Use the system, because after 32 months, if you're not using the service in these funded areas, you're going to lose it.

"The council should be encouraging people [to use the buses] rather than giving uninformed opinions in meetings."

The company had spent $1.3 million on six additional buses since July and increased the frequency of its Frankton Rd service to one every 15 minutes.

There were 324 Connectabus journeys made by 11 buses in the Wakatipu every day.

The company extensively advertised its services.

However, the council itself had "hardly ever" promoted public transport, he said.

"Historically, the council have provided free parking against public transport until recently, at the cost of many millions to the ratepayer, with no incentive for people to use public transport."

Mr McCammon said the company asked for bus shelters five years ago, but their installation had not begun until this year.

The network was larger and operated for longer hours than buses in most centres.

"Queenstown doesn't realise they've got a transportation system that's superior to most city systems, but it does have a cost to run."