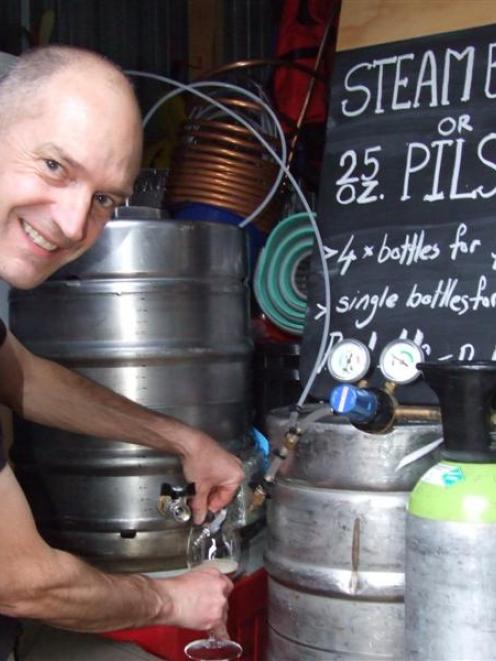 Little did he know that ''tongue in cheek'' event would result in him establishing Queenstown Brewers, launching two beers commercially and preparing to release a third, due out on November 1, coinciding with the company's first birthday.

Mr Wallace, who has a background in winemaking, said he began home brewing about six years ago from a shed on his property.

''I've always been interested in beer and a friend of mine was doing it, so I would go and watch him and help him and then I started doing my own stuff.

''I just got some really good recipes and some really good beers going. I make 50 litres at a time. That's quite a lot of beer and you need a hand drinking that, so I always had an audience and [tasters].''

He entered his 25oz Pilsner in the 2012 competition and took home the top prize, spurring an interest in his creation.

The more people who tasted it, the more Mr Wallace thought he might be on to a winner.

Both were brewed at Wanaka Brew Works, he said.

''I make all the recipes in my shed and work on it there. We test-drive it and once that's all sorted we take the recipe and brew it [in Wanaka].

''We use their facilities and try not to tie up too much of my own capital because ... it's more for fun.''

Each beer had a story associated with it, telling parts of the history of beer in the Wakatipu.

Steam Brew stemmed from the early days of brewing during the gold rush, when in the 1870s - particularly in California - it was ''steam driven''.

''Because they had no refrigeration ... the beer ended up brewing quite warm, it smooths the beer out.''

The 25oz Pilsner name derived from a gold rush story about some miners who found 36oz (1.02kg) of gold, the biggest single nugget weighing in at 25oz.

''They basically drank it away in beer.''

The new release will tell the story of the former Queenstown brewery established in the 1870s, which stood for 100 years on the site where the Novotel Queenstown Lakeside hotel is now.

Mr Wallace said the Tourist Hotel Corporation bought the land in the 1970s and at the time the historical society tried to get a protection on the building.

''One morning they came and it was razed ... I think someone [set fire to] it and then pushed it down.

''That story will be the next release.''

At present, the Queenstown Brewery produce was stocked in bars, restaurants and supermarkets in the resort and Mr Wallace was working on getting the beer on tap, and contemplating expanding his burgeoning empire.

''There's a cunning plan in there somewhere.''

• Queenstown Brewers will celebrate its first birthday at Pog Mahones on November 1, where its new release will be on offer for the first time, with both 25oz Pilsner and Steam Brew available on tap.