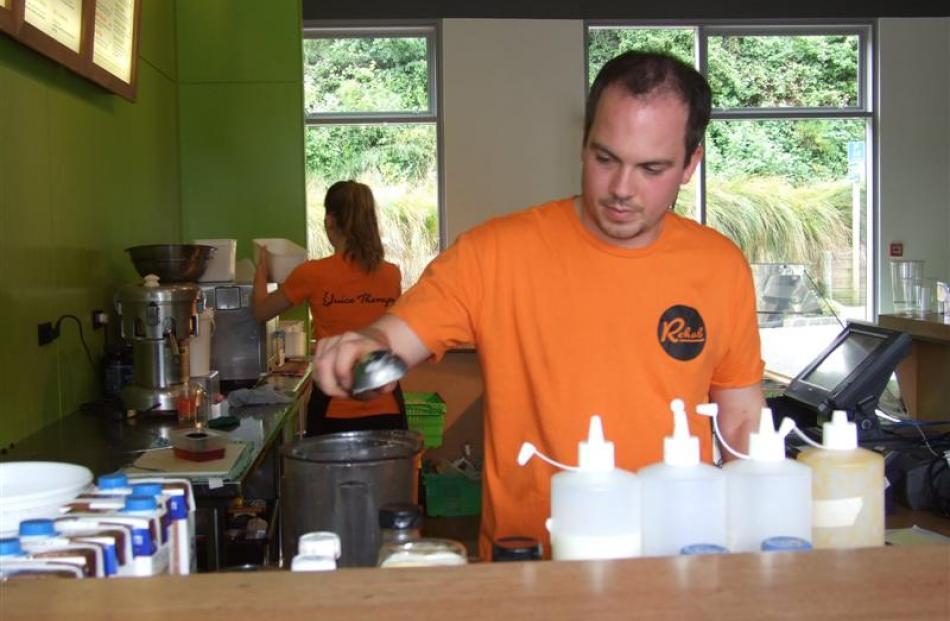 Alex Grant whips up a Frozen Monkey Relapse in the blender. Photo by Christina McDonald.

Two months ago, Alex Grant was discussing a dream of opening a healthy fast-food outlet and juice bar.

Fast forward to the present and Mr Grant is busy surviving the lunchtime rush in exactly that.

Rehab opened at Frankton's Terrace Junction at the beginning of this month and distinguishing features include a wall resembling a paddock and an extensive juice menu - created by squeezing ''everything you can juice'' from the fruit and vegetable aisle then mixing them as you would for a cocktail to uncover perfect combinations.

The outlet is owned by Rich Dohertery and Andy Henderson, with Mr Grant as the juice maestro.

He has worked as a chef for the World Bar in Queenstown and prior to that was a chef in the United Kingdom before moving into advertising.

''A lot of people have juicers at home now so I just thought let's do something a bit different. There's a real mix to it, hopefully to suit everyone's tastes.''

As for the food, Mr Grant is a firm believer that potatoes trump bread hands down so Rehab offers a sandwich-style of baked potato.

''If you take [the ingredients for a sandwich] and put it in a baked potato, it's a thousand times better.''

He said the original idea was to open in Queenstown, but faced with high rents, it was decided to walk before running, although having been open only a week when spoken to, he said a yoghurt and muesli bar was likely to be a new addition.

As for the name, it refers to the ''whole space'' with beanbags and magazines for every reader, as well as the food and drink.

''You can take five minutes out of your day to calm down [because] life's hectic.''