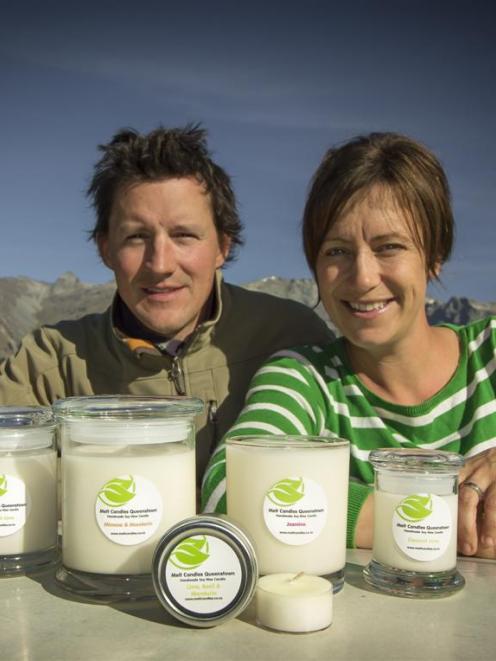 The couple, originally from the United Kingdom, met while working at Dart Stables, a horse-riding and trekking business at Glenorchy.

They have remained in the small settlement, at the northern end of Lake Wakatipu, where, along with raising two children, and Mr Lindstrand's full-time work as gardener at luxury lodge Blanket Bay, they now operate a candle business.

Mrs Lindstrand used to test candles for Melt Candles, a small business then based in Queenstown.

When the owner retired, the couple decided to make an offer and have grown the business since they purchased it just over 18 months ago.

Melt Candles are now stocked in 14 shops throughout New Zealand ''and growing steadily by the day'', Mr Lindstrand said.

Originally a school teacher, Mr Lindstrand came to New Zealand in 1999 and decided it was a place he would like to live. He moved permanently in 2004.

His future bride came to New Zealand backpacking in 2004, with the intention of travelling around and also working. When she met Mr Lindstrand at Dart Stables, where she also got a job, she decided to stay. While waiting to get his teaching qualifications recognised in New Zealand, he had wanted to do ''some fun work'' for a couple of months, but working at Dart Stables was so much fun, he ended up staying four years, he said.

When it came to candle-making, it had been a learning curve, as he had never worked with wax before.

But Mrs Lindstrand had always loved candles and he was a design and technology teacher, and thought he could make them.

They operate the business as a team. Mr Lindstrand makes the candles and his wife sells them.

Making candles was a very precise art and while the actual pouring of a perfect candle was achievable, it was all about having the right fragrances and strengths, he said.

Using soy wax, Mr Lindstrand makes the candles in the evenings, after the couple's children are in bed.

When Christmas orders begin arriving he can churn out between 50 and 60, even up to 70, in a night.

During that busy time in September and August, he was pouring candles nightly but, for the rest of the year, it was usually about two nights a week. It was easy to ramp up production if required.

It was quite a labour-intensive task but it was also very therapeutic and there were ''nice smells everywhere''.

They enjoyed attending markets and selling direct to customers, which meant ''priceless'' feedback.

But to get into retail outlets, with larger orders, was much easier and less time consuming than selling them individually. Their ideal aim was to be stocked by 50 shops in the next couple of years.

There were several big players in the candle industry and a lot of small ones, like themselves.

People liked the fact the candles were locally-made and, with so many tourists visiting the Queenstown-Lakes area, many wanted to buy a product that was locally produced.

They could take it away, burn it at home and remember their holiday and the fragrance sometimes brought back memories, so it was ''quite a good souvenir'', Mr Lindstrand said.

Ideally, the couple would love to both be working full-time in the business in the future.