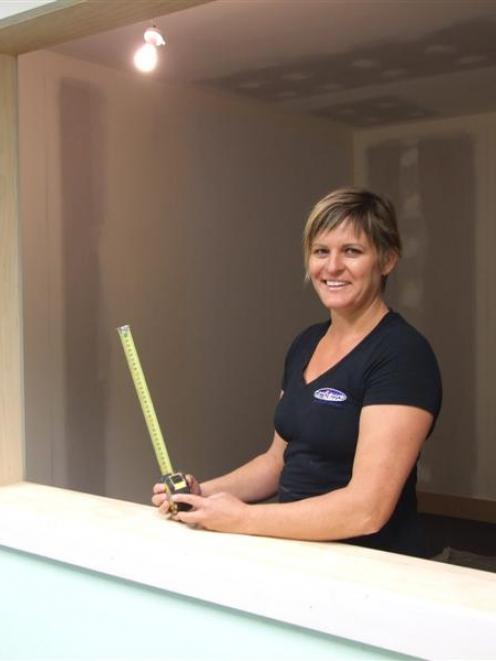 Configure Express Queenstown owner Kim Hollebon at the Remarkables Park gym, as it begins to take shape in preparation for opening on April 12. Photo by Olivia Caldwell.
Queenstown's first all-women gym is set to open next month and the owner says it will offer privacy and views for women who like to work out.

The Configure Express Gym has been under maintenance since the end of February and will host its opening night in about two weeks on April 12.

Owner Kim Hollebon (44) said the purpose of the all-women's gym facility was to make women feel comfortable when they went to exercise and encourage them to maintain a healthy lifestyle.

''We want other people to continually come to the gym and we support them right the way through their membership. That's part of what we're about.''

Mrs Hollebon and her husband Brad Hollebon took on the lease at the Remarkables Park premises in anticipation of a new business for the two of them because Mrs Hollebon, a personal trainer from Cromwell's NRG gym, ''just wanted to do my own thing''.

The gym would contain equipment imported from Italy and tailored for women, hair straighteners and a more ''elegant'' looking bathroom than most gyms, Mrs Hollebon said.

While exercise in Queenstown was reasonably expensive, the Configure Express prices would sit around the same mark she said.

The gym would offer special deals at $18 a week with no joining fee for 18 months, if signed up by April.

There would also be prizes, including a helicopter trip in Milford Sound.

To begin with there would be three full-time staff . The gym would be open from 6am-8pm from Monday to Thursday, 6am-7pm on Thursday and 7am-2pm over the weekends.

Mrs Hollebon said this was all subject to demand during the growing stages.

Like other gyms in Queenstown there would be a child-minding facility for mothers.

Apart from the all-female membership, the gym's second point of difference was the views of the Remarkables from the cardio equipment room.