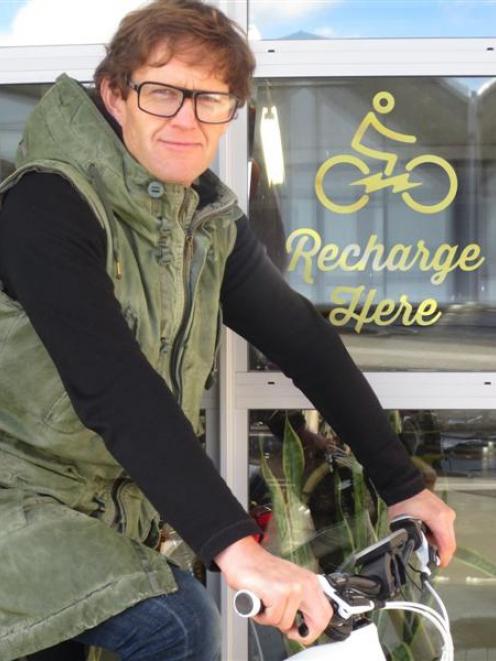 Charge About director Campbell Read with one of his eBikes at a charging station. Photo supplied.
It feels a bit like cheating.

Once I saw the approaching hill, I asked the bike to do more work than my legs.

The choice is available thanks to a business venture by Campbell Read, who imported a fleet of eBikes and now hires them out for use on Queenstown's trail network.

Mr Read came to Queenstown to work on the television miniseries Top of the Lake and since then had launched Charge About in January.

Powering along the lakeside trail between the Hilton and Jacks Point, it's easy to see the eBike attraction.

Sometimes (often) when cycling, I feel the views are hard to appreciate when breath is hard to find and the burn in my legs screams loudly.

On the exceptionally fine day when I enjoyed testing an eBike, everything I knew about biking was wiped.

The bikes have a top speed of 27kmh and families with children aged 11 have travelled distances of 60km in a day.

Cyclists can float up hills on the bikes and they are quieter than the panting from someone of average fitness.

Mr Read's charging network for the bikes is growing.

Charging points are now to be found at Gibbston Valley Cheese, Jacks Point Restaurant, the Hilton and at Provisions in Arrowtown.

In an effort to avoid the winter shade that is common on the Queenstown to Frankton trail, his tours will travel along the Kelvin Heights trail from the Hilton.

• More information on the eBikes can be found at chargeabout.co.nz.