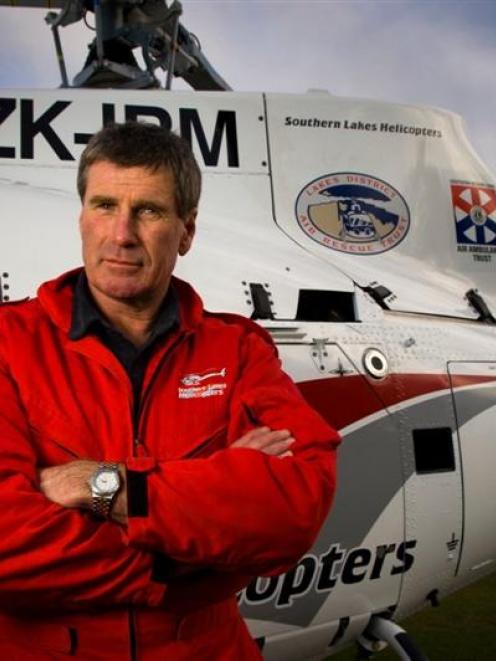 Last Friday, after speaking to the Otago Daily Times at 8am, he flew research divers from a remote corner of Fiordland before helping net wapiti for study purposes.

That night, he ended up on Stewart Island at 9.30 to collect a girl with a badly broken arm.Over 30 years and more than 30,000 hours of flying, he has had adventures galore and rescued an uncounted number of people.

''It's just the name of the game,'' he says in his self-deprecating way when asked about lives saved and rescues flown.

''You get used to it; you don't think much of it. The phone goes from control ... [saying] 'we've got a tasking. Can you respond to it?' [I say] 'yep, no problem, have the medics meet me at the hangar' and then [I get] night-vision gear, life rafts, life jackets and full of gas, fly it up and get into it.''

Milton-born Sir Richard (62), who said he was humbled by the honour, is regarded as ''legendary'' in the industry and the South.

That status was reinforced on February 18, 2008, when his Robinson R44 helicopter lost its tail rotor.

Sir Richard managed to keep the craft airborne for 25 minutes before landing the chopper like a fixed-wing plane on a remote agricultural airstrip.

Later that day, he was back in action rescuing French sailors from a capsized yacht off the Otago coast.

Proud wife Carol said her husband did not like being singled out.

Through his company, Southern Lakes Helicopters, Sir Richard is a sponsor of numerous community organisations and charitable causes.

He was a pioneer in the use of night-vision goggles.

One search ended with an injured man being found just after 4am thanks to his artificial light source, ''whereas we couldn't find him in the daylight''.

On another occasion, an injured climber was lifted off ''just on dark''.

''I think [he] would have succumbed to hypothermia during the night.

''That's what I call a positive result because it would have been a negative one had we left them and looked for them in the morning.''

Sir Richard has fought fires, helped in flood rescues and winched people off ships, in one case ferrying a man and his severed arm to meet an air ambulance. The arm was packed in ice but in the end was not successfully reattached.

He was part of the 2013 Kenn Borek Twin Otter search and rescue on the Antarctic's third-highest mountain.

''We saw what we needed to see and the SAR team in there couldn't do anything.''

Three employees of Canadian company Kenn Borek Air were killed when their aircraft hit the mountain. ''All we did was pick up a few personal belongings.''

On a brighter note, he admitted to having ''a lot of fun'' flying people from the Hollywood film industry for the Lord of the Rings films, the Hobbit films and The Chronicles of Narnia.

''They are great people to work with ... they're extremely, extremely hard-working, [they do] long hours but they feed you well and it's great.''

Then, during winter, there was heli-skiing, which involved him ''carting people to the top of the hill'' and picking them up again at the bottom.

''As long as you've got a heater going, you're pretty happy.''