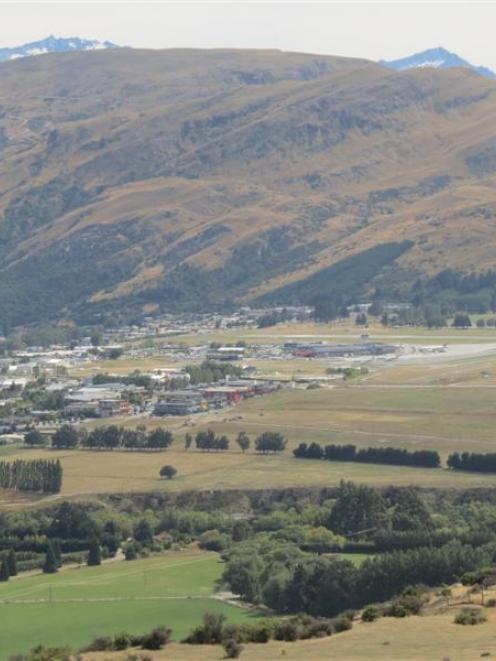 Frankton Flats and Queenstown Airport, as seen from the slope of the Remarkables. Photo by James Beech
The number of international passengers to Queenstown Airport in June shot up by almost half as many as in the same month last year but domestic passenger numbers in June fell sharply, compared to the month in 2012.

Figures released by Queenstown Airport Corporation today reveal international passengers in June 2013 were up 47.3% over June 2012, a rise of 5450.

The airport corporation said the frequency of flights made the difference between the performances of the mid-winter months.

The driver for international growth was more flights, while the driver for the fall in domestic passengers was fewer flights.

There were fewer scheduled domestic flights, due to Jetstar suspending its five weekly services between Christchurch and Queenstown from November 14 last year and flying a reduced service to Wellington until its route to the capital is also suspended from September 1.

Adverse winter weather in June forced the diversion or cancellation of domestic flights and was also contributed to the year-on-year drop in passenger numbers.

Worst affected was the Christchurch-Queenstown-Christchurch route flown by Air New Zealand's regional propeller driven ATR aircraft, which are not equipped with the pilot-aiding required navigation performance (RNP) equipment as jet aircraft are.

Airport chief executive Scott Paterson said yesterday the decrease in domestic passengers was a cause for concern only if it continued.

''As far as July's concerned, we've had a good run of good weather, so we haven't had the disrupts we saw in June.

''We know we're getting more planes so there is a good chance our volume will be up on July last year, which itself was well up on the previous year.''

The two major airlines which service Queenstown Airport say they are pleased with passenger numbers to the resort this winter.

The national carrier increased its domestic capacity into the resort by 27% over the past five years, which equates to an extra 164,000 seats per year.

''We have also significantly increased our transtasman services into Queenstown during the peak winter season, with 30 trips per week operated by the Air New Zealand and Virgin alliance,'' the spokeswoman said.

''This compares to nine trips per week Air New Zealand operated during the same period five years ago.

"A Jetstar spokesman said domestic flights to Queenstown were in ''high demand'' this ski season, both during the school holidays and into August.

''Jetstar's winter capacity into Queenstown from Sydney and Melbourne is up by around 30% compared with the ski season last year and loads are tracking well from both Australian cities,'' the spokesman said.

Tourism New Zealand announced the first half of 2013 delivered strong international visitor arrivals and set a solid base for the winter season.