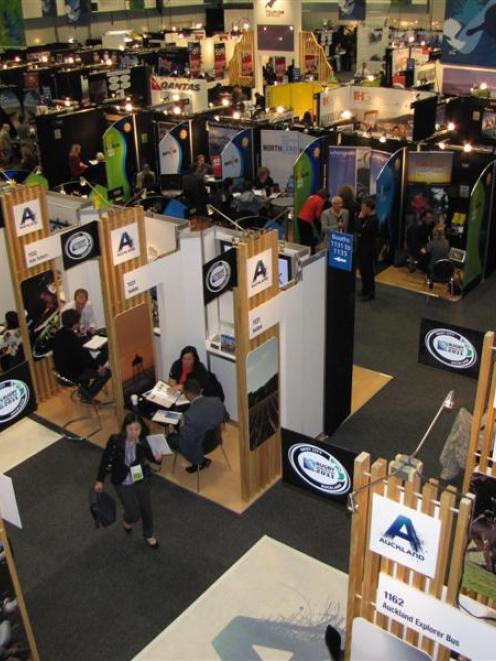 A view of mostly North Island tourism exhibition booths, where appointments with travel buyers are kept, in the main hall of the Queenstown Events Centre for Trenz 2011. The major travel trade fair returns in May. Photos by James Beech.
Trenz 2012 returns to Queenstown and the Southern Lakes in early May after $164 million worth of new business resulted from the trade expo's resort debut last year. Queenstown Times reporter James Beech tells you everything you need to know about the biggest event on the tourism industry calendar.

International travel buyers come to Trenz to purchase accommodation, transport and activities at wholesale rates to include in brochures, websites and itineraries for the coming international holiday seasons.

They seek fresh, innovative tourism products and locations to offer their clients.

A media programme runs parallel to the business event for domestic and international media.

How long has it been going?

Trenz has operated since the early 1960s and has been held annually in its existing format since 1994.

Trenz gives international travel buyers the opportunity to meet New Zealand's top tourism operators under one roof and learn about their products and services. Existing relationships are strengthened and new contacts are made with the aim of securing business for the coming international holiday seasons.

It is four days of focused business activity when buyers can view the wide range of visitor experiences New Zealand offers and negotiate contracts with motivated sellers.

The showcase highlights the importance of tourism to New Zealand as a creator of wealth and jobs across the country.

Tourism is one of New Zealand's largest foreign exchange earners, worth $9.7 billion annually.

Queenstown Events Centre, plus networking events and activities at locations around the resort.

More than 1000 will attend, including 308 international travel buyers, 270 New Zealand exhibitors, about 30 international media and 30 domestic media, plus sponsors, VIPs and the host and management team.

There will be a diverse range of New Zealand tourism products on offer: everything from skydiving, spas, food and luxury shopping tours, to air safaris, boutique hotels, forest retreats and learn-to-paint excursions. 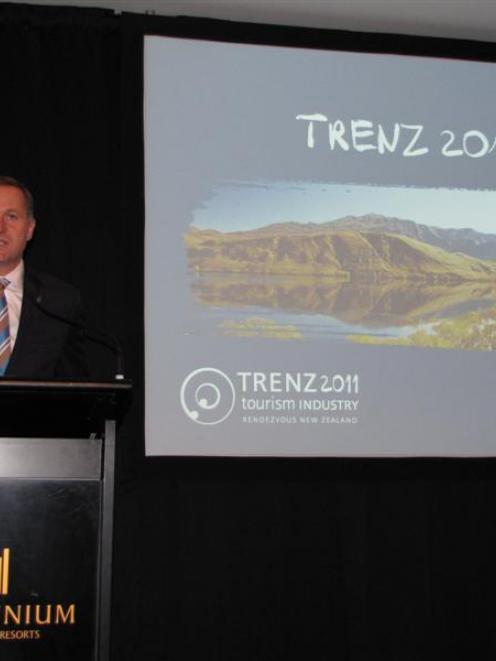 Prime Minister and Tourism Minister John Key told Trenz media delegates in Queenstown last year New Zealand wanted to increase visitor numbers, but also market itself as a quality experience. Mr Key was scheduled to attend this year's event.
Buyers will attend from New Zealand's traditional visitor markets, such as Australia, the United Kingdom and the United States, in addition to newer and fast-growing markets such as China and India.

Collectively, they generate about 75% of international tourism business coming to New Zealand.

Consumer and trade journalists, photographers and researchers for print, radio, television and online will cover Trenz, including the Otago Daily Times and Queenstown Times.

Which operators from the Southern Lakes are exhibiting?

More than 76 will negotiate deals and network in the exhibition halls. They include all sectors, from Accor, the group behind four major hotels in Queenstown, to Ziptrek Ecotours.

Trenz is an invitation-only international trade event. Entry is open only to pre-registered and approved international buyers and exhibitors and invited media.

How does it work?

The business-to-business event involves an electronic appointment system, which enables more than 15,000 booked appointments of 15 minutes between buyer and exhibitor.

A total of 27 New Zealand tourism businesses will be attending Trenz as first-time exhibitors. They include a historic boutique hotel in Central Otago wine country, warbirds and classic car operations, personalised helicopter tours with commentaries of geography and history, scenic tours of the Coromandel on a custom-built tour boat, and learn-to-sketch and paint excursions with tutors in English, Spanish and Chinese.

The value of Trenz

The expo plays an important role in the marketing and growth of New Zealand's valuable tourism industry. Last year, exhibitors reported their Trenz attendance generated a total of $164 million of new business over 12 months.

• 98% rated their attendance as very successful or successful.

• 84% rated the quality of their appointments as excellent or good.

• 81% rated the quality of buyers as excellent or good.

• 70% rated Trenz as more important than their other marketing activities.

Organisation was also deemed "excellent" and Queenstown was the best location for buyers.