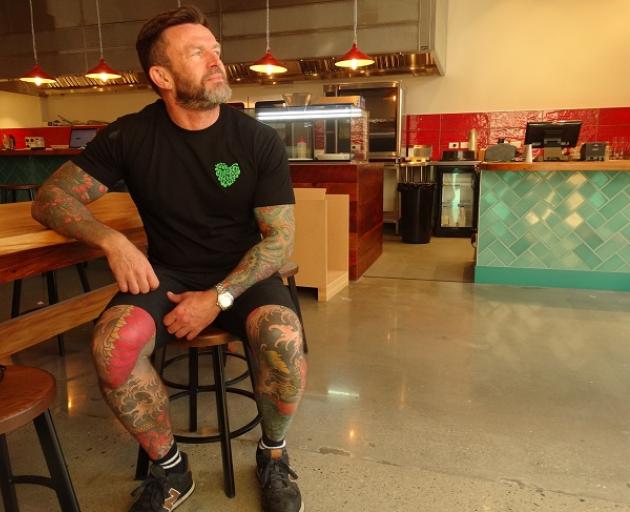 Queenstown chef Darren Lovell inside his new restaurant, Love Chicken, an idea he’s been hatching for almost 20 years. Photo: Mountain Scene
At the age most people start thinking about saving for retirement, Darren Lovell changed countries and careers. He talked to Tracey Roxburgh ahead of opening his restaurant, which is full of love, at Queenstown Central.

Around the same time he read a book which ultimately inspired a new restaurant he’s built from the ground up, opening on Saturday.

As a teenager in Brisbane, Lovell says he wanted to be either a chef or a journo, but in those days a chef was someone who‘‘cooked fish and chips at the golf club’’.

He was instead shipped off to university to become a member of the fourth estate and was working for the Brisbane Mail on a general news beat when he got his first taste of Queenstown during an Air New Zealand junket in the mid-90s where he learnt to ski.

By 1998 he was living in Los Angeles heading up New Idea and TV Week’s office there, where he got paid to schmooze.

In the early 2000s, after the internet became ‘‘a thing’’, he relocated to Sydney and spent four years as entertainment editor of Who Weekly before he decided to put down his pen and follow his heart to Queenstown and the food industry, hoping to one day own a restaurant.

‘‘I look back and I think ‘what the hell was I doing thinking of changing careers at the age of 36?’

‘‘I didn’t know the first thing about cooking in a commercial kitchen, so ... I got a job washing dishes at what was then called Pier 19, earning, like, $10 an hour.’’

Lovell says it wasn’t long before he asked co-owner Vicki Onions if he could come in, in his own time, and make the soup of the day.

‘‘If I started at 10am, I’d get there at 8am and make the soup ... every day I did something different; I never repeated myself for a whole summer.

He had a meteoric rise through the ranks and within a year was second-in-charge.

Trying to save money to build a house, he decided to get a second job, washing dishes at Fishbone.

It wasn’t long before then ­owners Mike Hill and Paul Stevenson hired him as their head chef.

Lovell says he’d spend weekday afternoons in the Fishbone kitchen, mornings cooking for Queenstown House bed and breakfast and on one of his ‘‘days off’’ he’d still do a prep shift at Pier 19.

In 2006 he and business partner Mark Godden bought Fishbone, ticking the restaurant-­owning goal off his bucket list, and he’s since become one of Queenstown’s top chefs.

But in the back of the 50-year-old’s mind was the idea of creating a restaurant with a social conscience from the ground up, inspired by Fast Food Nation, which looks at the global problem of the United States’ fast-food industry.

Lovell says he hasn’t eaten from a fast-food chain since he read it in the early noughties and introduced that policy for Fishbone staff as well.

But when one apologised for eating KFC about 18 months ago, Lovell decided to become part of the solution.

He felt his employee shouldn’t have to apologise for eating something he craved, and started questioning why someone didn’t ‘‘just do the right thing’’.

‘‘I thought ‘why doesn’t someone create a fast-food concept that uses all-NZ produce, organic produce where possible, support NZ growers and soft-drink makers and whatnot?’

‘‘By the end of the day I’d come up with the idea of Love Chicken.

‘‘We’re lucky in NZ — we have access to some incredible produce ... soit actually became easy to do.

‘‘We’re taking the fast-food model, or concept, and just making all the right choices that are trying to find solutions to problems and not create more problems.’’

He’s hoping the Queenstown Central store, near St Pierre’s Sushi, will become the first of several in NZ, and in time his staff themselves will start spreading the love — Lovell’s planning to give them regular paid time off so they can volunteer in the community.

Looking back he’s still not sure if his success is down to luck, hard work or a combination of the two.

‘‘They say ‘you can’t make it in Queenstown, it’s too expensive’, but, you know, if you’re determined you can do anything.’’