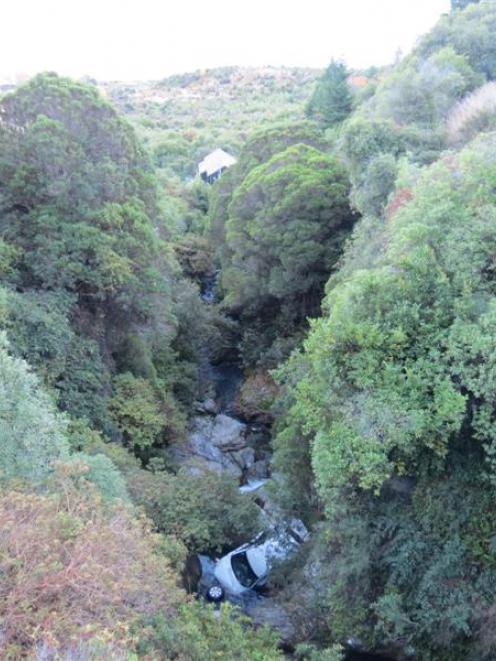 The Toyota Highlander SUV which left Kingston Rd, crashed through the road barrier and scrub and fell 30m into Wye Creek early yesterday. Photos by James Beech
Two young British men living in Queenstown are ''extremely lucky'' to have survived when their SUV plunged 30m from Kingston Rd into a ravine in an area known as the Devil's Staircase.

Acting Sergeant Phil Hamlin, of Queenstown, said yesterday indications were the 24-year-old driver of the Toyota Highlander lost control on State Highway 6 and failed to take a bend on the southern approach to the Wye Creek bridge between 3am and 5am, crashing through a roadside barrier.

''The vehicle has then continued through scrub before plunging an estimated 30m into the Wye Creek ravine,'' Acting Sgt Hamlin said.

''The two male occupants were able to escape the vehicle and one managed to scramble up to the road and flag down a passing motorist.''

Because of his injuries, the driver was unable to reach the road, so a helicopter was requested, St John Queenstown station manager Craig Downing said yesterday. 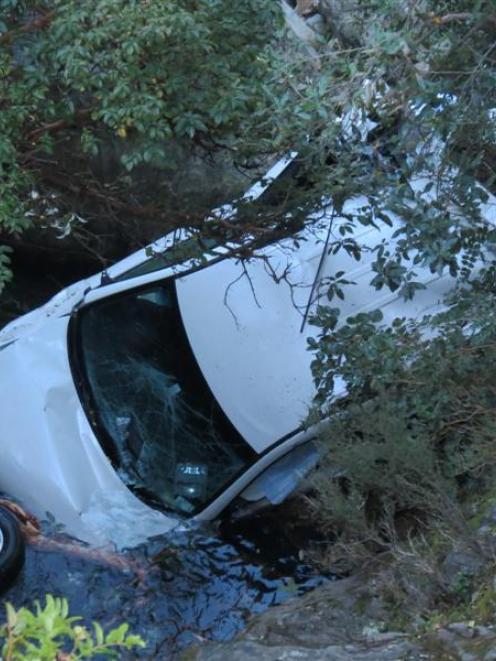 Sgt Hamlin said a Heliworks helicopter and crew lowered a St John intensive care paramedic into the ravine at dawn and the driver was extracted from the creek. He was transferred to a St John Queenstown ambulance and both men were taken to Lakes District Hospital, Frankton.

''They were clearly distressed about what had happened and very cold from not only their car landing in the water, but from that time of the morning,'' Mr Downing said.

''They were treated for mild hypothermia at the same time.''

Traffic on State Highway 6 was delayed briefly to allow the helicopter to attend.

The driver is believed to have suffered leg and possible internal injuries and the 22-year-old passenger minor injuries. One of the men was discharged from Lakes District Hospital last night while the other remained in hospital.

A police serious crash investigator arrived from Invercargill yesterday and inquiries into the crash are continuing.

Sgt Hamlin said it is too early to say what caused the crash. However, it appeared both men were wearing seat belts and police say these undoubtedly prevented further injuries.

''The rescue effort was a collaboration by all the emergency services and without all of us playing our part extraction of the patient would have been extremely difficult,'' Mr Downing said.