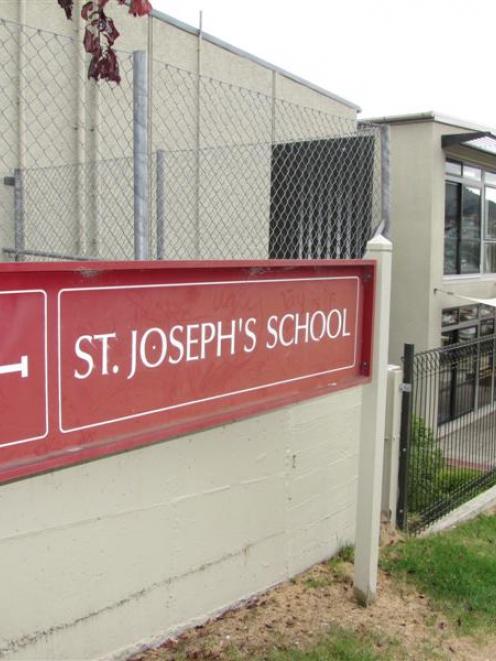 St Joseph's School says the cost of operating the primary school is greater than funds allocated by the Ministry of Education, but the ministry disagrees. Photo by James Beech.
St Joseph's School, in Queenstown, has a deficit working capital of $23,000 and says it does not get enough money from the Ministry of Education to cover its running costs.

However, the ministry said St Joseph's funding was based on the same formula for other integrated schools and the majority found the funding sufficient to cover their costs.

Principal Trish Inder made the comments after the 2009 annual accounts were received.

She praised the fundraising efforts of the Parent Teachers Association (PTA), sponsors and supporters, but said $30,000 of the money already raised had been allocated this year to extra teacher and teacher aide time for pupils.

"While the Ministry of Education does fund boards of trustees to operate the school, reality is that the cost of running a school is greater than the income received," Ms Inder told the Queenstown Times.

"We, like other schools, rely on PTA fundraising to assist with the running costs and also at times for additional projects."Board chairman Rene Kampman, of Queenstown, said the school struggled with its annual budget of $800,000 to $1 million.

Mr Kampman said $23,000 was not a great deficit in the grand scheme of things, but an extra $100,000 a year would provide for an increase in teaching time, specifically with children recognised as needing one-on-one tuition.

"The ministry and the Government says every child has the right to free education, but costs increase every year and state funding is just not adequate.

"It affects the quality of the child's education, but it's not putting it at risk, as the school has an absolute focus on it."Southern regional manager Raymond Webb said the school's operations grant for 2009 was $186,307 (excluding GST) and $23,816 was paid as a furniture and equipment grant.

A copy of the school's 2009 annual accounts was due at the ministry by May 31, Mr Webb said.

"Some other minor funding was paid to the school from the ministry and other Government grants, to the value of $40,548.

"Some schools and their community want the school to provide additional resources and programmes, and do so through fundraising activities."

Mr Kampman said the school's annual book fair was "a significant fundraiser" and would be held on May 23.

"All schools throughout New Zealand are actively fundraising to top up their budgets," he said.

"I don't think that St Joseph's predicament is unique. Not enough money is being put to the coal face."

The Beetham St school has 152 children enrolled in years one to eight.

Earlier this year, Education Minister Anne Tolley agreed to an interim increase from 160 to 175 pupils, following the recapitation of years seven and eight at Wakatipu High School.

Tony Hanning, Catholic education director for the Diocese of Dunedin, said: " One hundred and seventy-five is sufficient to manage the school roll this year without having to turn away new pupils, particularly when some are siblings of existing pupils."

Mr Hanning said operations funding from the Government was pupil-based.

However, "fundraising would have to meet any shortfall."