Hand-fed hoiho on diet of salmon 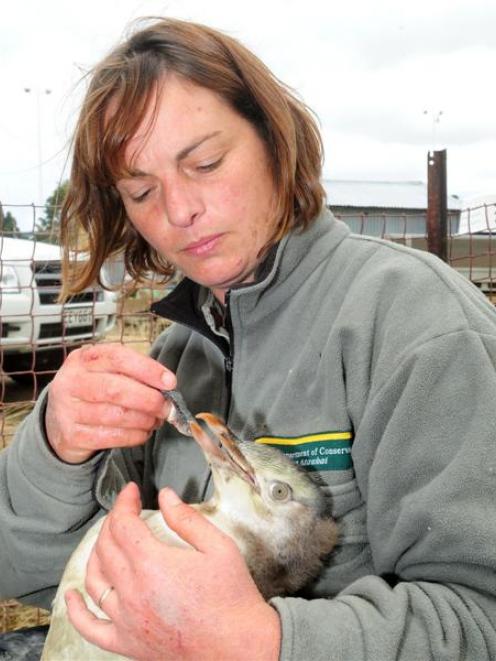 Department of Conservation ranger Cheryl Pullar feeds salmon smolt to yellow-eyed penguin chicks in Owaka on Thursday. Photo by Craig Baxter.
With designer housing and gourmet salmon meals delivered by a personal chef twice a day, a group of lucky yellow-eyed penguins probably have their peers green-eyed with envy.

The six chicks were adopted by the Department of Conservation in Owaka last week after they were found to be underweight at the Long Point reserve in the Catlins.

"They should really weigh about 4kg or 5kg by now, so these guys are all at least a couple of kilos underweight," Doc ranger Cheryl Pullar said yesterday.

"We'll feed them up so they have a better chance of survival in their first year at sea ... It's about helping ensure there's a breeding population out there.

"I suspect the parents of two of them were injured, because they're so skinny. We don't know what happened to the other parents. All the rest of the chicks at Long Point are really healthy."

Not all the chicks were grateful for the hospitality, though, Mrs Pullar said.

"They all have different personalities. Some are difficult to feed and some are easy, while one comes out and attacks me every time because he's so hungry."

The endangered yellow-eyed penguin Megadyptes antipodes, or hoiho, is considered one of the world's rarest penguin species, with an estimated population of just 4000.

The penguins average 75cm high when fully grown, weigh around 7kg and can live for 20 years.

"We monitor the penguins three times a year: when nesting in October, to check the chick numbers in December and what we call the pre-fledge weigh at the end of January, which gives us an opportunity to see what condition they're in before the fledge," Mrs Pullar said.

"We also determine the male-female ratio then, by measuring the feet and the head. Generally, the males are a wee bit bigger.

"When they're about 1 year old, they get that distinctive yellow band around the head, which is how you tell the juveniles from the adults."

The chicks would take about three weeks to fatten up, Mrs Pullar said, when they would be returned to the Long Point reserve.

Nelson company King Salmon has been donating the smolt.