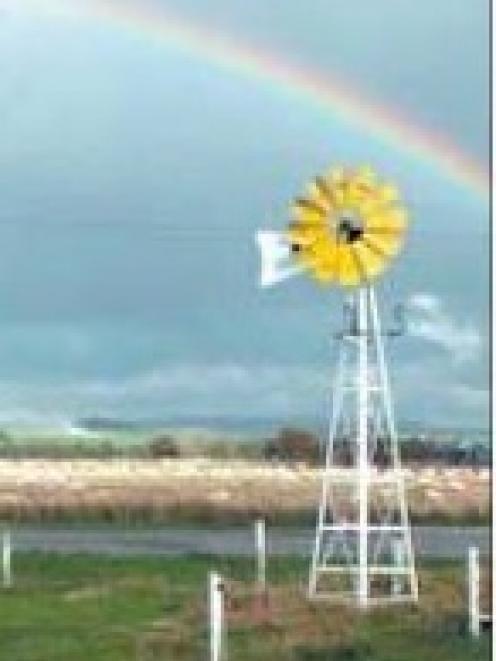 This lone windmill near Wyndham may have up to 50 gigantic wind turbine friends spinning with it by 2010, if the Slopedown Wind Farm proposed by Wind Prospect Group gets the greenlight. Photo from Wind Prospect Group.
Slopedown Wind Farm development manager Doreen Marchesan has set a February 2009 target date for a planning consent to be lodged with Southland District Council.

The consent will be accompanied with an Assessment of Environmental Effects after site investigations were planned for completion by the end of this year.

An ecological assessment of the site had been carried out, with significant ecological areas and threatened bird species identified, Miss Marchesan said.

The proposed site for the Slopedown Wind Farm is 15km east of Wyndham and 26km southeast of Gore on farm land.

The total area of the wind farm was 6sq km, although the land title was bigger, Miss Marchesan said.

Results of the ecological assessment have been used to revise the proposal for the turbine layout and guide the planning of on-site access roads.

Areas of significant ecological importance will be avoided and all steps taken to mitigate the impact on native bird species known to inhabit the proposed wind farm area.

The rifleman was not at risk during the development because it would hardly ever venture from its forest habitat located beyond the proposed wind turbine boundary.

However, the kereru or woodpigeon, was at risk of possible collision with a turbine, while the South Island fern bird might have infrastructure built in its habitat, Miss Marchesan said.

The mitigation strategy proposed for the wind farm would include measures to reduce the risk to the species identified, Miss Marchesan said.

Studies yet to be carried out at the site include civil design, noise, aviation hazard, landscape and visual, economic, transport and interconnection line route assessments.

Up to 50 wind turbines will be erected, generating an installed capacity of up to 150MW.
‘‘It does depend on what turbines are selected,'' Miss Marchesan said.

The main option at this stage of the proposal is for the electricity to go into the 220kV line running between Clinton and Gore.

‘‘The line is likely to head in a northeast direction from the site,'' Miss Marchesan said.

Relevant land owners would be approached to discuss the potential for access at the next open meeting, Miss Marchesan said.

Wind Prospect CWP Limited, the company behind the Slopedown Wind Farm proposal, is also planning to investigate the potential for improving telecommunications in the Wyndham area.

‘‘This would include cellphone and internet access by locating infrastructure to assist in improving telecommunications,'' Miss Marchesan said.

The local community will also have access to a community trust fund. The details of the fund were yet to be decided, with input from Wyndham and the surrounding district needed, Miss Marchesan said.

Slopedown Wind Farm will hold a public exhibition open day on Monday, December 8, in the Wyndham Memorial Hall from 2.30pm to 7.30pm.