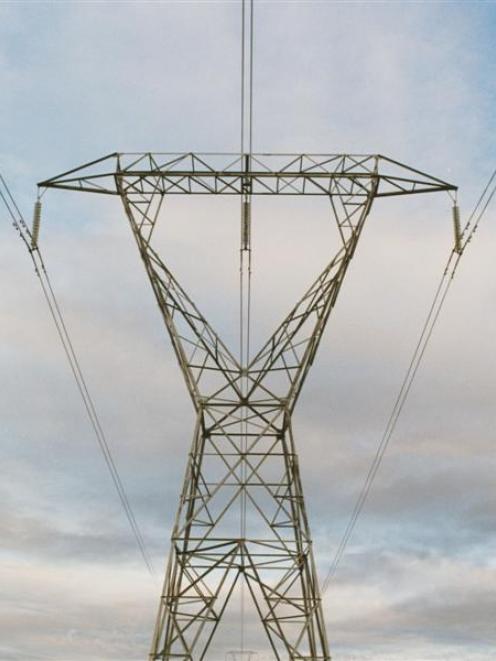 An artist's impression of a tower after upgrading to double lines. Photo by Transpower.
Transpower plans a $155 million upgrade of key transmission lines between the Clutha River and the Waitaki River to cater for approved and potential wind generation projects.

Transpower, which owns and operates the national grid network of high voltage electricity lines, wants to increase the capacity of lines between Roxburgh and Twizel, Roxburgh and Islington, Aviemore and Livingstone, and Benmore to Aviemore.

An information pack was sent to 250 landowners with existing lines on their properties this week.

One of the main aims of the project was to help "unlock the potential" of renewable generation in Otago and Southland.

Several large wind farms were proposed in the lower South Island and eleven power generation projects, together comprising 1922MW of new generation capacity, were either consented or under investigation.

An Environment Court decision is also pending on Meridian Energy's 280MW North Bank Tunnel project, which was also a factor.

Most of the companies behind the new power schemes have given evidence at consent hearings or appeals highlighting the need for an upgrade of key transmission lines to cater for the projects.

"With the wind farms and hydro schemes in the pipeline, we need to reinforce the network to be able to shift more power," Mr Wishart said.

Some of the work might be delayed if any of the projects did not go ahead, but an upgrade was still needed, he said.

Transpower was seeking response from the communities within the Roxburgh and Waitaki Valley area. Submissions close on August 14.

It plans to submit a proposal to the Electricity Commission for approval by October.

The preferred option for the upgrade is to almost double capacity by adding wires to each conductor on three 220kV lines - between Roxburgh and Islington, Aviemore and Livingstone and Benmore and Aviemore.

Some towers or foundations might need to be strengthened to hold the additional wires.

On the 220kV Roxburgh to Twizel line, it was proposed to boost capacity by thermal uprating (increasing the maximum allowable operating temperature of the transmission line wires).

The earliest work was likely to begin was 2012 and it would take three years to complete, Mr Wishart said.