Hayden Croft is a lot more comfortable behind the scenes.

The Silver Ferns performance analyst firmly believes the focus should always be on the players.

And that is exactly what he is fixed on when he is reviewing the footage and crunching the numbers. 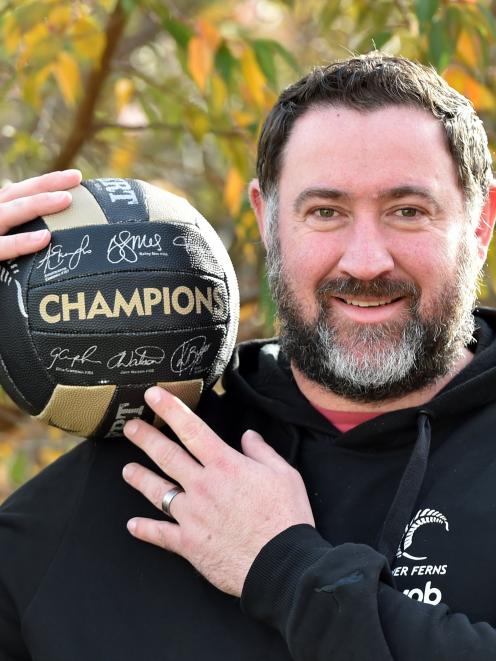 Silver Ferns performance analyst Hayden Croft has been named team support person of the year at the ASB Otago Sports Awards. PHOTO: PETER MCINTOSH
The hours he spent analysing patterns, examining structures and poring over statistics would have all been for nothing had the players not had the ability to take the information on board and adapt their game.

And adapt they did. Those little gains helped the Silver Ferns rebound from a bitterly disappointing 2018 Commonwealth Games campaign to win the World Cup just 15 months later.

Croft might operate in the back room but his contribution has not gone unnoticed.

He has been named the team support person of the year at the ASB Otago Sports Awards.

It was a strong category. Black Caps strength and conditioning trainer Chris Donaldson and veteran All Black physiotherapist Peter Gallagher were also finalists in what is a new award this year.

"I don’t like to be singled out. I’d rather be that person at the back of the pack and the limelight should be on the players always," he said.

"So it is a little bit uncomfortable to receive a personal award. But it is really special and the Otago Sports Awards are a fantastic acknowledgement of Otago sport.

"The other nominees in this category are people I admire and look up to."

The 52-51 World Cup final win against Australia was an incredible feeling, Croft said.

"We were just shaking and couldn’t believe what had happened. It was quite a surreal moment and I remember very well us getting back to the changing rooms and then preparing for the medal ceremony.

"But probably the best part of the whole day was just going back after the awards and we spent a good hour or more in the changing rooms just having a good time. That was really neat."

Croft, who is the head of the Institute of Sports, Exercise and Health at the Otago Polytechnic, got his start as a performance analyst with the Steel under former coach Janine Southby and also built a relationship with Noeline Taurua when they worked together at the Steel.

Taurua called him into the national setup when she took over as Silver Ferns coach following the Commonwealth Games.

"We really worked on getting good systems and structures working on court. My role is really about videoing all the trainings and cutting, clipping and coding and doing some statics as well.

"On game day I will sit high in the grandstand ... and will be analysing the game live and crunching those numbers."

He relays the information to the coach during the game and in breaks.

"The coaches really trust their gut and what they see. The numbers are just there for them to check in."

Leading into the tournament the Silver Ferns had made a 10% gain in key areas and that proved a winning advantage.

Croft plans to continue working with the Silver Ferns. He also does some work for World Rugby and the Otago rugby team.