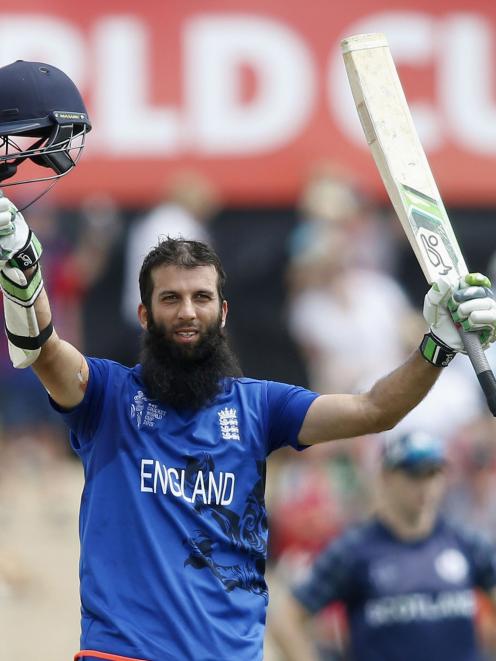 England batsman Moeen Ali celebrates 100 runs during their Cricket World Cup match against Scotland in Christchurch. Photo by Reuters
Man of the match Moeen Ali probably summed up the England mood after they got on the board with a 119-run win over Scotland at Hagley Oval yesterday.

That's the story; now's not the time for them to overreach on the ambition front.

The sentiment is understandable given England had been well beaten by Australia in their opening match, then smashed by New Zealand last Friday in a serious contender for England's worst ever match.

Scotland were in difficulties early and eventually fell for 184, England winning by 119 runs.

The Scots harboured a genuine belief they could get a win which would break both their World Cup duck and what confidence remains within England, and register their first win over the Auld Enemy in five attempts.

Beat England at football, golf, curling and caber tossing certainly; cricket, not yet.

Ali's second ODI century was stroke-laden and Bell chipped in. Captain Eion Morgan, out of runs of late, managed 46 off 42 balls and there was a brisk unbeaten 24 from Jos Buttler to put some late punch in the performance.

At 54 for three, Scotland were withering, and only a bright 71 by Aberdeen opener Kyle Coetzer provided a high point.

"Everybody still believes in what we can do and what we've done in the past," Morgan said.

"We didn't sit and sulk about past performances and we were looking forward to today's game."

England comfortably avoided the large banana skin and if the speculation on what they might yet do in the cup hasn't exactly risen, at least they're up and running.

Scotland captain Preston Mommsen could face a charge of stating the bleedin' obvious when he talked about learning curves out of the first two games against New Zealand - a three-wicket loss when run rate was uppermost in some New Zealand batsmen's minds - and England.

"It's brilliant to get that experience, put it in the bank and take it away with us. Hopefully we'll be better for that," he said.

Steven Finn felt the lash of Brendon McCullum's bat in Wellington last week - two witless overs costing 49 - but rebounded nicely with three wickets in his nine overs. Only Tim Southee has taken more wickets in the cup than Finn's eight.

The Scots head back to their spiritual home, Dunedin, for a game they'll be desperate to win against Afghanistan on Thursday.

England return to their House of Horrors, Westpac Stadium in Wellington to play Sri Lanka. Lose that and they really will be on the cusp of an early departure.