Cricket: Everything to play for 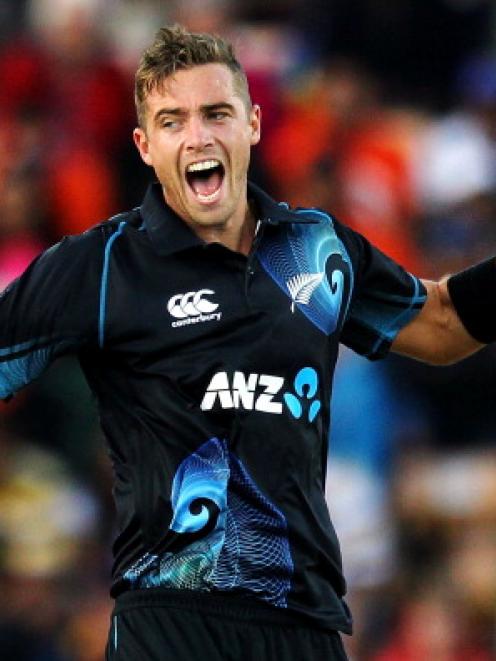 Tim Southee
The Black Caps' World Cup match against Australia at Eden Park tomorrow is being billed as the biggest game between the nations in decades. Cricket writer Adrian Seconi looks at some key factors which may influence the outcome.

New Zealand's opening attack of Tim Southee and Trent Boult might be a tad polite by comparison with their Australian rivals.

But Southee put on an exhibition in medium-fast bowling with a seven-wicket haul against England, and Boult can be unplayable when he gets the ball to swing and nip back.

The pair have been operating in tandem for years and are better equipped to exploit the conditions at Eden Park than any other opening pair in world cricket.

The power of three

Australia has some devastating batsmen in its line-up but New Zealand can call on two of the most punishing players in the history of the game and one Brendon McCullum, who is going rather nicely at the moment.

No team, even Australia, can boast the power New Zealand has at No 6 and No 7.

McCullum's career strike rate of 93.01 is incredible, considering he has played 243 ODIs.

But lately he has been operating on another level.

His 77 from 25 deliveries in the eight-wicket shellacking of England in Wellington on Friday was hard to fathom.

New Zealand caught an over-confident Australian side napping in the opening game of the 1992 World Cup and has an opportunity to spring another surprise on our transtasman rivals.

While excellent form means the Black Caps have the begrudging respect of the Aussies, the teams have not played an ODI since the last World Cup.

Australia has a history of ignoring our cricket sides.

It appears the Blacks Caps have been shut out of the Boxing Day Test for at least another eight years and that ought to provoke a strong reaction from McCullum's men.

Think it through for a minute.

If the Black Caps win, chances are they will top Pool A.

That will make for an easier quarterfinal but a potential semifinal against South Africa, while Australia could play India in the other semi.

Who would feel more comfortable playing the Indians?

They boast a formidable batting line-up but South Africa is a more complete outfit and will arguably present more of a challenge.

The forecast is for fine spells, light winds and afternoon showers.

If the weather ruins the game and no result is possible, it is as good as a win for the Black Caps.

Australia has already been robbed of an opportunity to pick up the two points for a win when its game against Bangladesh was abandoned without a ball being bowled.

Another lost point could spell an end to Australia's chances of topping the Pool A standings.

New Zealand's chances of winning improve by 18.1% when it plays at home.

If you remove games in which no result was possible, New Zealand has a winning percentage of 56.9% at home compared with 38.8% away.

However, closer analysis of ODIs specifically between New Zealand and Australia erodes that advantage.