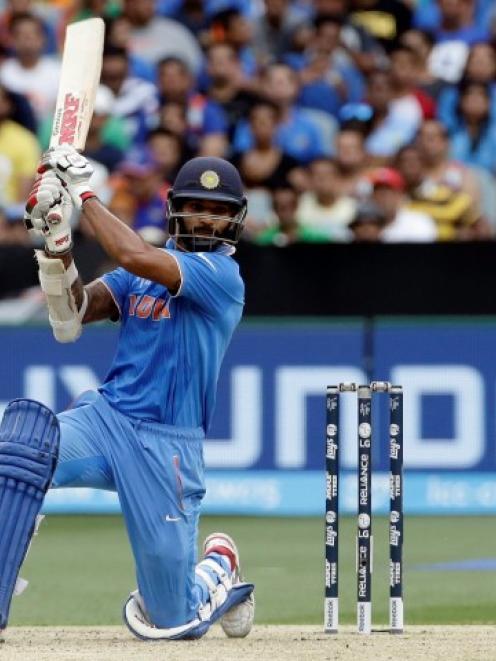 Shikhar Dhawan scored a fine century to help India beat South Africa at the MCG. Photo: Reuters
Since day one of the World Cup, three teams have dominated speculation on who might emerge from the scrum to meet in the March 29 final at the Melbourne Cricket Ground.

Australia, South Africa and New Zealand have been regarded as the popular picks and with good reason.

Strong fielding units, packed with aggressive bowlers and powerful, intelligent batsmen have had them top of the pops for the final.

Now to that trio must be added India, on the strength of what they have shown at the cup thus far.

Seeing off Pakistan comfortably in an opening game in Adelaide loaded with the usual pressures of that neighbourly set-to is one thing. But Pakistan, as shown against the West Indies in Christchurch on Saturday, aren't much chop right now.

But South Africa, at the MCG last night, was a different story; however, they handed them a thoroughly comprehensive 130-run thumping.

India's form in Australia has been distinctly average leading up to the cup.

Yesterday, however, there was fizz about their performance.

There's never been an issue around their batting, which is loaded with class.

Shikhar Dhawan has been hit and miss, but his fine century yesterday was all hit; Virat Kohli is the kingpin of the batting operation; while Ajinkya Rahane is a dazzling operator, whose performance yesterday threw important extra vim into the Indian innings at just the right time.

Throw in the world recordholder Rohit Sharma - 256 against Sri Lanka last year, remember, which takes some getting - lively Suresh Raina and captain MS Dhoni's finishing qualities and that's as good a top six as there is going around.

The bowling had more question marks about it.

The favoured five are doing well. Mohit Sharma, a late replacement for Ishant Sharma, has impressed; industrious Mohammad Shami, who makes good use of the new ball, and has taken six wickets in the first two games; and Umesh Yadav with his genuine pace, have been good value.

Their fielding is generally tidy. The issue around India's hopes pre-cup was whether they had the wherewithal to win in countries where their most recent experiences have been grim.

New Zealand beat them 1-0 in on their test visit last summer and duffed them 4-0 in the ODI series. Their travails in Australia are well known.

But they have started the cup in assertive fashion. South Africa lost seam bowling king

Vernon Philander early to injury yesterday but suddenly questions are arising over their capabilities to last the distance.

Sure, you can write this off to one game gone wrong and they're too good to be downgraded on the strength of that. Plenty more overs to be bowled in the cup.

That said, India were energetic, skilful and well up for the job last night before their noisy faithful at a packed MCG.

Next up they have the United Arab Emirates and the West Indies in a Perth double before heading to New Zealand to finish pool play against Ireland in Hamilton and Zimbabwe at Eden Park.

Their hard challenges are behind them and they're in solid shape. They could not have asked for more. India might have been fancied as a sleeper if you were thinking outside the big three. Perhaps the sleeper has woken up.