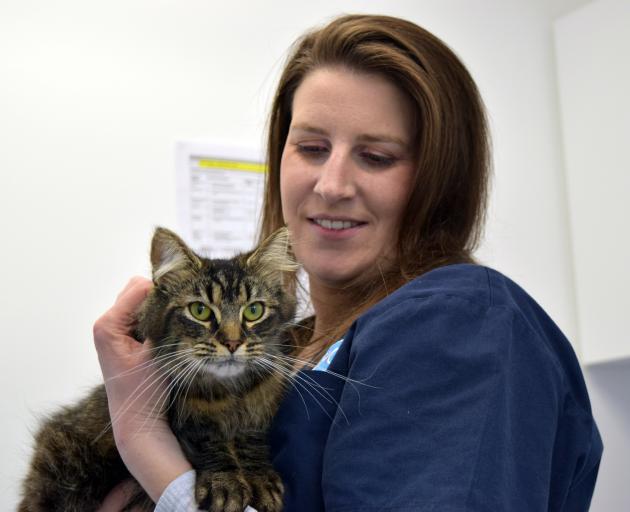 SPCA Otago Dunedin centre animal care team leader Emma Collins cuddles pregnant cat Winter who was surrendered by her owner to the animal shelter in Opoho. PHOTO: SHAWN MCAVINUE
A Dunedin animal shelter is calling for foster carers as it prepares for the kitten season.

This is at the same time as a report has been launched seeking to address New Zealand’s cat problem.

Most of the 140 kittens and 32 adults cats placed in foster care in Dunedin this year were during "kitten season", Miss Collins said.

When a Dunedin woman realised her cat Winter was pregnant she "surrendered" her pet to the shelter because she could not afford to care for so many animals.

Winter would soon join the nearly 40 cats in all the foster care available in Dunedin now.

As more cats and kittens were expected at the shelter soon, more foster parents were needed, she said.

New Zealand Veterinary Association chief veterinary officer Helen Beattie, of Dunedin, said the national cat management strategy group — of which she was a part — had launched its strategy report.

The report outlines recommendations and supporting evidence asking the Government to provide legislation to provide a clear framework on responsible cat ownership and for managing the population of stray and feral cats.

The framework would provide local government with the flexibility to enforce cat management bylaws including:

Limiting the number of cats per household.

Desexing cats unless they belonged to a responsible and registered breeder.

Identification of cats, preferably by microchipping and registration in a national database.

People needed to "value" cats as they did dogs, by managing them in the same way, she said.

"So they’re safe, kept at home and we know where they are, identify them, and [they have] been desexed so they’re not having unwanted litters," Dr Beattie said.

Arguments about why a framework to manage cats would not work were "common but flimsy", she said.

Next year, the group planned to meet Associate Minister of Agriculture Meka Whaitiri, who is the the minister responsible for animal welfare, to discuss the report.

Cat management was an "emotive" issue but she doubted it was as contentious as the Government believed it to be.

The group includes various organisations including Local Government New Zealand, the Morgan Foundation, Companion Animals New Zealand and the SPCA. The Ministry for Primary Industries is an observatory member and the Department of Conservation is a technical advisory member.

An SPCA spokeswoman said more than 27,100 kittens and cats arrived at SPCA centres in New Zealand last year. Kittens accounted for 75% of all animals brought into centres.

"To prepare for the significant influx of animals over the warmer months ahead, our Dunedin Centre is calling on people to open their hearts and their homes and foster animals in need."