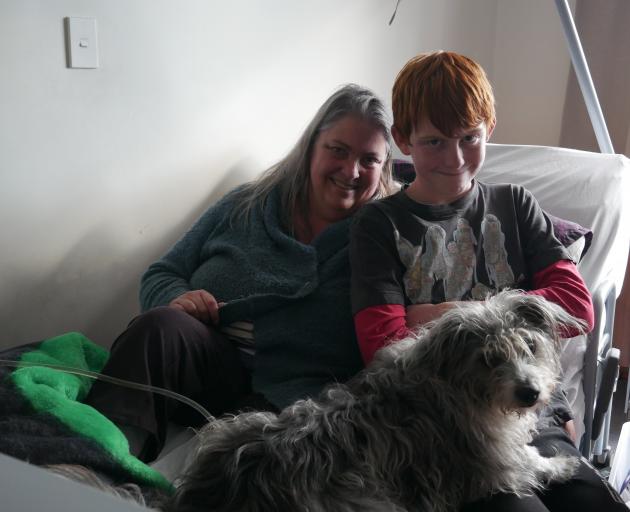 Nadine Goodall was out with her son, Josh, last month in Gordon Rd when she had to make her way around a ute that was parked in a driveway and over the footpath.

After going on to the road to get around the car, she fell when the wheel of her chair got caught on a broken piece of footpath.

Ms Goodall started falling "face-first" but luckily was able to put her hands out.

"Josh got a heck of a fright."

Two women who saw her fall rushed over to help, and Ms Goodall, who is bedridden for most of the day, later posted about the experience on social media to thank the pair.

After that, she was "astounded" by how many other people commented to say they too had fallen on broken footpaths in Mosgiel.

She also heard stories about elderly or disabled people who were too scared to go out on their own for fear they would have a fall, she said.

Determined to get the footpaths fixed, she encouraged other residents to send her photos of broken areas so she could lodge fix-it forms on the council website.

"The footpaths are terrible in Mosgiel, absolutely terrible."

So far, she had about a dozen photos that she planned to submit online.

"I’ve made it my mission to do something about it.

"I am going to make sure something happens."

Disabled Persons Assembly kaituitui (secretary) Chris Ford said he experienced a similar incident many years ago so appreciated how Ms Goodall was feeling.

"From DPA’s perspective, we hear about this pretty much all the time."

As part of a disability issues advisory group that worked with the council, Mr Ford said the council always wanted to hear from people about their experiences.

However, it should not take incidents like Ms Goodall’s to remind the council footpaths needed upgrading, he said.

Footpaths and other pedestrian infrastructure, like crossings, should be accessible so everyone could safely navigate them, he said.

A council spokesman said the council was increasing the level of investment in renewing footpaths around the city.

"We’re sorry to hear about this incident, which sounds like it was largely the result of some inconsiderate parking.

"It is an offence to park across a footpath or cycleway."

He encouraged people to report any problems about infrastructure, such as footpaths, as soon as possible, so necessary maintenance could be undertaken.

Reports could be written on a fix-it form on the DCC website or telephoned in on 477-4000.