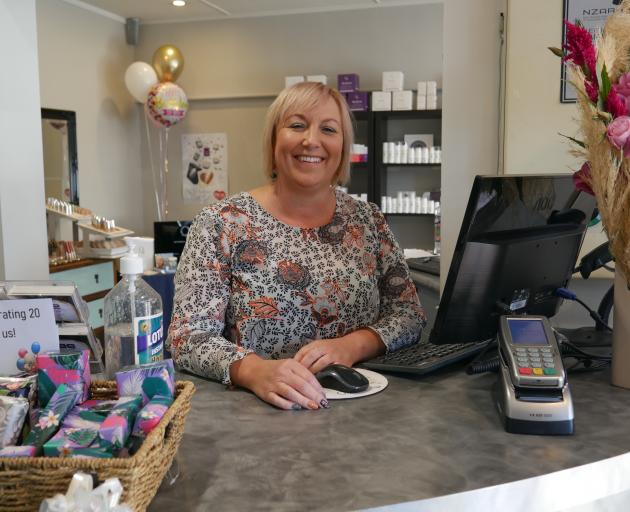 Vibe Hair & Skin Therapy owner Vicki Woodrow bought the salon 20 years ago this week. PHOTO: JESSICA WILSON
There will be bubbles and cupcakes in a Mosgiel hair and skin salon this week.

It has been 20 years since Vicki Woodrow bought what is now Vibe Hair & Skin Therapy, not that she can believe it.

"I don’t feel like I’ve owned it for that long," she said.

"I suppose that means that I actually still enjoy my job."

The business was originally Headquarters and was located upstairs in Gordon Rd, alongside a dentist.

Ms Woodrow worked up there for about six months before the business moved down to its current site.

When the previous owner wanted to sell it, Ms Woodrow took the opportunity.

She had managed the business, so knew what she was in for.

The name was changed to Head to Head until Ms Woodrow added the beauty therapy salon about six years later.

It was then that Vibe Hair & Skin Therapy came to be.

Over the years, the industry has changed massively.

Hairdressing was now seen as a legitimate business and career, whereas years ago people were viewed as "just a hairdresser", Ms Woodrow said.

They were the first to know a lot of personal things, usually around pregnancies and relationship issues, she said.

It was the people that kept Ms Woodrow in the job for about 28 years.

She still got the "warm fuzzies" when a client told her they loved their hair.

"Someone can come in and be really down, and you can just turn their whole day around just because you’ve taken the time to talk to them."

There were many clients that had been around since she bought the salon.

"You do become part of their family."

She enjoyed working in Mosgiel and never felt the need to move the business elsewhere.

"Clearly we’ve done OK to still be here after 20 years."

Nearly everyone in Mosgiel knew each other so when clients were on the same appointment schedule, it was a chance for them to catch up too.

"So there’s quite often quite a lot of chat going on," she said.

To celebrate the salon’s 20th birthday, there will be bubbles, cupcakes and giveaways this week.