Plan B for foodbank collection

The streets of Dunedin will be a little quieter next Thursday than is usual for the day, as the annual emergency services Christmas can drive has been been cancelled.

Fire and Emergency New Zealand, police, St John and volunteers combine each year to collect cans for the city’s foodbanks on the first Thursday of December.

This year, instead of listening out for sirens and giving their cans to volunteers, Dunedin residents will be able to make a contactless drop-off.

Can drive co-ordinator and senior firefighter Aimee Taylor said while it was disappointing to cancel the event, it was the safest option.

"We have to be really safe about how we’re planning things, especially for that far out."

It was difficult to plan an event with the uncertainty of Covid-19, especially when the drive relied on volunteers.

"It kind of puts that pressure on people, who might be a little bit scared," she said.

"It’s just an expectation that you don’t want to put on the public in these uncertain times because stress levels are high enough."

As a result she met representatives from the foodbanks to come up with a "plan B".

That was to create a contactless drop-off point at the former Smiths City building, in South Dunedin.

It will be open from Saturday until Sunday, December 5, from 8am-6pm daily.

Other businesses and community groups also held their own collections.

A Givealittle page had been set up so people could contribute from home, as getting to and from the drop-off point was not possible for everyone, Ms Taylor said.

The money and items would be split between the Presbyterian Support Otago, St Vincent de Paul and the Salvation Army foodbanks.

- Mosgiel’s can drive was cancelled earlier this month. 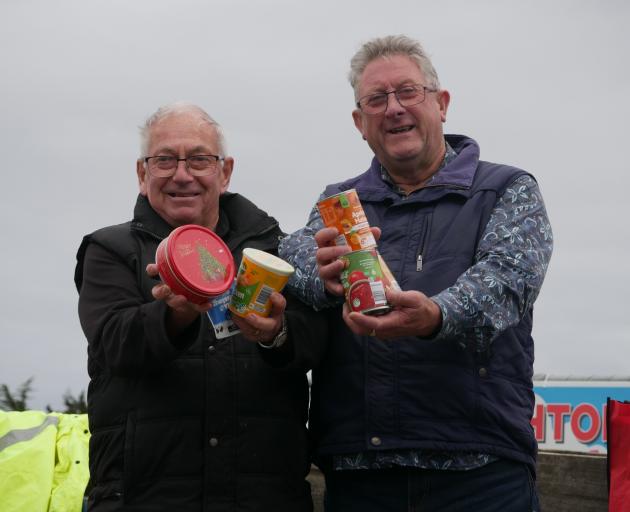 Green Island Lions Club board member Colin Weatherall (left) and president Ken Schumacher hold some of the items given to the club’s can collection at the Brighton Domain on Monday night. There are many other collection points, including the following:

- From Saturday to December 5, there will be a contactless drop-off point in the former Smiths City building in South Dunedin. Opening hours are 8am-6pm daily. To give money, search for The Dunedin Foodbanks Christmas Food Drive at givealittle.co.nz.

- On Monday, there will be collections near Beachlands Speedway in Waldronville and at the Green Island Rugby Football Club and the Village Green Cafe and Bar in Green Island from 6.30pm until 8pm.

- On Wednesday, December 1, a drive-through collection will be held at Forsyth Barr Stadium from noon until 7pm. Highlanders, Otago rugby and Otago cricket players will be there.

- Until December 10, there will be food collection points at Dunedin City Council libraries and Moana Pool.