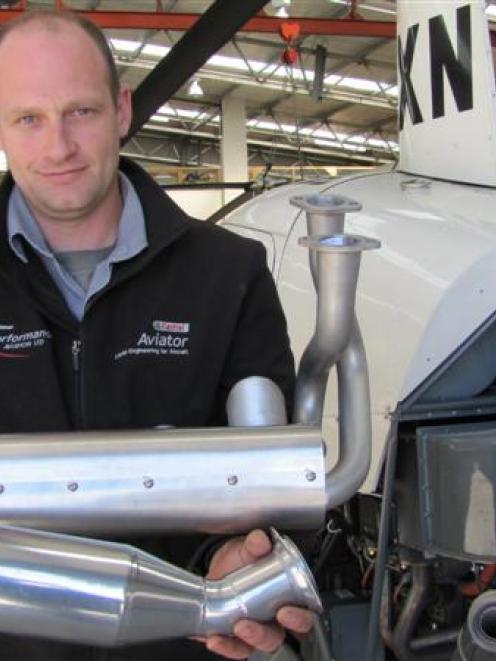 Now, Performance Aviation has two world-first innovations to its name and is keenly sourcing new ideas so its customers can stay safe, reduce fuel consumption costs and enjoy improved performance from their aircraft.

Co-director Matt Bailey, who operates the company with his wife, Lynette, has a passion for aviation which was sparked while living near an airport in Masterton and shared with his brother David.

He has been a licensed aircraft maintenance engineer for 22 years - "Since I left school, it's the only job I've ever known" - and his work has taken him to Switzerland, Nelson and Wellington.

"I am interested in innovation and coming up with ideas to save customers money," he said.

Approval was also received for a Robinson 22-tuned exhaust system, designed in partnership with US company Power Flow Systems and fitted to several helicopters in New Zealand and Australia.

The system helps pilots of the R22 Beta model operate to the same levels of performance expected from a R22 Beta II model, by increasing the exhaust efficiency.

Mr Bailey said the overspeed protection modification can save customers up to $15,000 on serving damaged engines, while the new exhaust system can save thousands in fuel costs.

"We trialled it with New Zealand's largest training organisation and they said they thought it was saving at least 3 litres [of fuel] an hour," Mr Bailey said.

Mr Bailey's focus on aircraft efficiency also prompted him to develop a better muffler for Robinson 44 helicopters, but New Zealand's limited market meant he gave his design to a Canadian company.

"I just want to see it out there because it works.

"It is very frustrating when you come up with an idea and our industry is so regulated . . . and prohibitive for such a limited market of New Zealand and Australia," he said.

Mr Bailey worked for Air Nelson on leaving school and then worked at Wanaka's Alpine Fighter Collection as a hangar supervisor, from 1997 to 1999.

He then worked for Crossair in Switzerland as lead mechanic on an Embraer 145, a Brazilian, 50-seat twin-engine jet aircraft.

On returning to New Zealand he and his wife came back to work in Wanaka before Mr Bailey took a Wellington-based engineering job for Air Nelson.

They returned in 2006 to found Performance Aviation, initially out of shared premises but now based in its own purposed-built, leased hangar.

The company employs three engineers - Ken Francis, a former Air New Zealand engineer with 747 and DC10 experience, Andy Goodall, an air force-trained helicopter engineer, and new recruit Sam Martin, who recently completed his Nelson Marlborough Institute of Technology course in aircraft engineering, has completed all his examinations for licensing and is now focusing on completing the necessary hours to obtain his full qualification.

Mr Bailey said there were many benefits from being based in Queenstown Lakes and Central Otago, regarded as having the highest concentration of helicopter ownership per capita.

"We are looking after helicopters from Bluff to Fox Glacier.

"There are eight helicopter service companies in Queenstown and Wanaka. That's four each.

"Dunedin has two, Christchurch has three, so it is a very competitive market," he said.

Performance Aviation Ltd specialises in Robinson 22 aircraft but also works for clients who own turbine helicopters and fixed-wing aircraft.

The company also looks after a locally owned Mustang P51 and an Aerovodochody L39.

The future remained bright at Wanaka Airport, despite a quieter year for the aviation industry last year, he said.