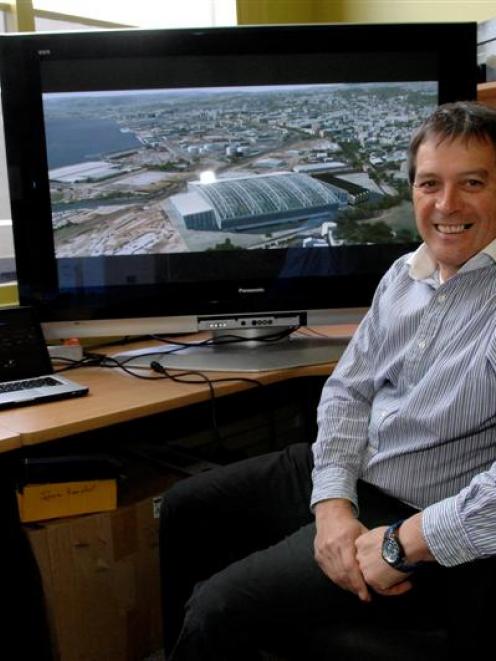 Ian Taylor is urging Dunedin to use the new stadium as a way of creating jobs for talented young people. Photo by Linda Robertson.
The start of the Rugby World Cup today was a chance to display Dunedin's IT talent to the world, Animation Research Ltd director Ian Taylor said yesterday.

ARL, with the help of University of Otago survey school students, has created three-dimensional images of the rugby stadiums in Auckland, Wellington and Dunedin, which include an aerial tour of the respective cities.

Mr Taylor said Sky Television was interested in the concept but did not have enough money to pay. Maori Television made a financial contribution and ARL completed the project free of charge.

In a conversation, Mr Taylor was told the survey school students had been involved in projects that would help.

School of Surveying spokesman Pascal Sirguey said in the past two years, 140 surveying students in his third-year remote sensing technologies paper had undertaken photogrammetry projects that had helped build a 3-D digital model of Dunedin city.

As part of their training, students had worked with digital aerial photographs provided by NZ Aerial Mapping to map individual buildings or blocks of buildings in the city.

Those projects were contributing towards an overall model he was creating as part of a wider geographical information system for the city, Dr Sirguey said.

The Dunedin City Council had also supported the work by providing the underlying data and the council was interested in the model's potential uses, such as support for urban planning.

"Over the next couple of years, further students taking the course will continue to fill up the model with digitised buildings," Dr Sirguey said.

Mr Taylor said the work carried out by the students of Dunedin and the stadium would be seen around the world during the rugby tournament and it was time to use that leverage to start creating jobs in the city, he said.

Previously, Mr Taylor had been in talks with the Otago Polytechnic, university, Otago Sports Academy and others about how to build on the profile of the stadium once the Rugby World Cup had ended.

Talks had been held about reigniting the profile-building exercise.

Mr Taylor has been subject to critical letters-to-the-editor in the Otago Daily Times about his pro-stadium stance, particularly from people concerned rates might have to rise to pay for the cost overruns.

"This is not about paying rates. If paying rates is all we talk about, we will go backwards.

"This is about creating high-paying jobs for people in Dunedin so they can pay rates by staying here," he said.

The idea was to use Dunedin-based technology to create high-paying jobs for those aged under 25, encouraging them to stay in the city, rather than ply their trade elsewhere.

The stadium could be used as the biggest and best research and development facility in the world for sports analysis, Mr Taylor said.

Use of the stadium for sports analysis should not be restricted just to Dunedin residents.

"What stops us from finding excellent young golfers in Roxburgh, or cricketers in Alexandra, and bringing them down to be analysed by the sort of stuff used by the Australian cricket team?

"This city has given us the most unbelievable laboratory we can use to ignite this research."

Mr Taylor recently hosted an International Cricket Council technology executive whom he walked around the stadium, across to the cricket oval, to where the new tennis courts were to be built and on to the hockey rink. At the same time, he pointed out the polytechnic and the university, which were both a short walk from the stadium.

"This guy has been part of the $4 billion sports city in Dubai and was blown away. We have a mini Dubai sports city - by accident."

Today, Mr Taylor speaks at a conference in Auckland where organisers have given him the topic "Changing the face of global sport, from Dunedin".

That was exactly the theme he had been promoting around the world, he said.

This week, four people from Dunedin had flown to Plymouth, England, to set up facilities to film and track America's Cup boats, and another three had flown to Barcelona for another project.

Ben Taylor was running ARL's golf operation in Europe, but in all cases, the software support was coming from Dunedin, Mr Taylor said.

"That's the way we work. We don't have work here but we can support the work we have overseas from here," he said.