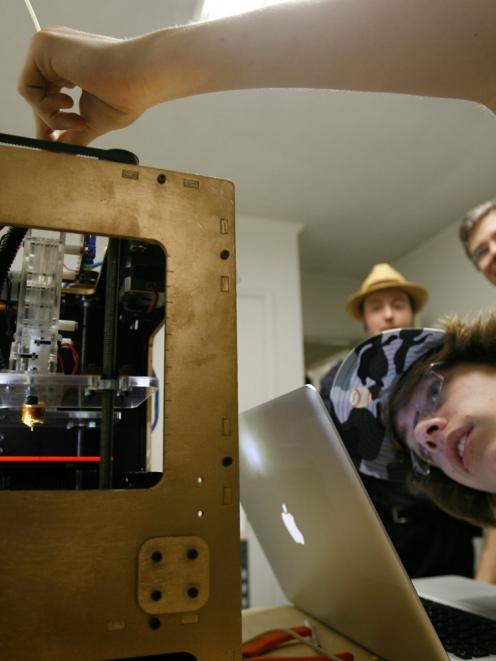 Brian Isdale, 14, foreground, and his father Jerry Isdale, rear right, work out some kinks on their kitset 3D printer. Photo by MCT.
Home computer printers gave people the ability to produce bank statements, concert tickets, holiday cards and party invitations at the touch of a button. But what if you wanted to "print out" a dinner plate, the leg of an armchair or an eyeglass frame?

It may sound far-fetched and futuristic, but plastic extrusion machines that can do this - popularly known as 3-D printers - are poised to enter the home electronics market.

"Tonight Show" host Jay Leno has an industrial version in the warehouse-sized Burbank, California, garage that houses his collection of more than 200 cars and motorcycles. His mechanics design hard-to-find parts on a laptop computer and then use the machine to make them real.

"It's a bit like when I was a kid and I watched 'The Jetsons' and they'd walk up to a machine and press a button and get a steak dinner with the baked potato sitting next to it," Leno said. "But instead of a steak dinner, you're getting an old car part."

Leno's machine is as big as a refrigerator and costs about $US27,000. But home models with more limited capabilities have begun to make their way into the consumer market, with some units selling for as little as $US750.

Although now mostly celebrated by geeks and hobbyists, consumer 3-D printers that can make jewellry, toys, tools and kitchen appliances from downloaded designs will be commonplace one day, people in the field believe.

"We're sort of like the guys in the garage building PCs in the '70s," said Sean Bonner, a founder of a Culver City, California, tech club, Crash Space, that bought a 3-D printer for its members to use.

"Except there are thousands of people doing this across the world, in clubs or at universities or in their basements, and we can all communicate online to move this technology forward by creating and improving the software to run the 3-D printers, to design things and share our designs online," Bonner added.

The $750 model, which comes in kit form, is the CupCake CNC. It can't produce objects as large or finely finished as the machine Leno owns. Mostly it's used for novelty items - figurines, shot glasses, funky eyeglass frames, chess set pieces and snap-together pieces for a Gothic cathedral model - designed or downloaded from enthusiast sites on home computers.

The home production of truly useful objects will come in the future, adherents believe.

"My hope is that people, instead of going to the store, will just go online and download what they need and print it out," said Bre Pettis, co-founder of Brooklyn, New York-based MakerBot Industries, which makes the CupCake CNC.

"That's where this is going, whether it's a new doorstop or the little wheels in your dishwasher."

The CupCake CNC, which is primarily made of wood, is in the shape of a box with windows cut out so that its working parts can be seen. Hovering over the top is an extruder that heats up ABS plastic - a material used to make lightweight, rigid objects - and then moves in patterns directed by a computer.

MakerBot has sold nearly 1000 of the kits, which has so outstripped the small company's capacity that in a Frankenstein-like twist, it has called upon current CupCake CNC owners to help make parts for new units.

The company could get competition in the future from firms in the 2-D printer business. One of the giants in the field, Hewlett-Packard, began selling industrial 3-D models in Europe last month.

Although they carry the HP brand, the machines were manufactured by Stratasys, the company that made Leno's machine.

"Not to underestimate the efforts start-ups like MakerBot are putting forth, but I think it's just bridging the gap," said Terry Wohlers, a consultant to companies using 3-D printing.

"The document printers, all of them, I can tell you for a fact have looked at this at some level."

Royal Philips Electronics, a Dutch company that played key roles in the development of compact discs and other technologies, has moved into the consumer 3-D printer world. But it doesn't manufacture the machines.

Philips has established a website, at www.shapeways.com, where budding inventors can sell 3-D-printer-made products from their own designs.

"This was sort of an experiment for Philips," said Peter Weijmarshausen, who heads the Shapeways unit that the company established in Eindhoven, the Netherlands.

"The technology is there to allow consumers to make any product they want, exactly how they want it. We saw that void in the marketplace, and we're filling it."

A designer from anywhere in the world can submit an item, and if it's accepted Shapeways will determine the cost of manufacturing it on an industrial 3-D printer. Then the designer sets the retail price.

It's a made-to-order business - an item isn't manufactured by Shapeways until an order for it comes in. The designer gets the money marked up from the cost of manufacturing, minus a 3.5 percent fee that goes to Shapeways.

"There is a group that really wants to know about 3-D printing and how it works, but there is also even a bigger group that just wants the end result," Weijmarshausen said.

"In the end it doesn't really matter to the end user how we make it," he added. "It only matters that they can get their custom product."

But at Crash Space, club members don't mind if their creations come out a little rough. For them, the attraction is largely that they can envision an item, design it and then push a button to make it real.

"This can change the way things are built."