The future of television 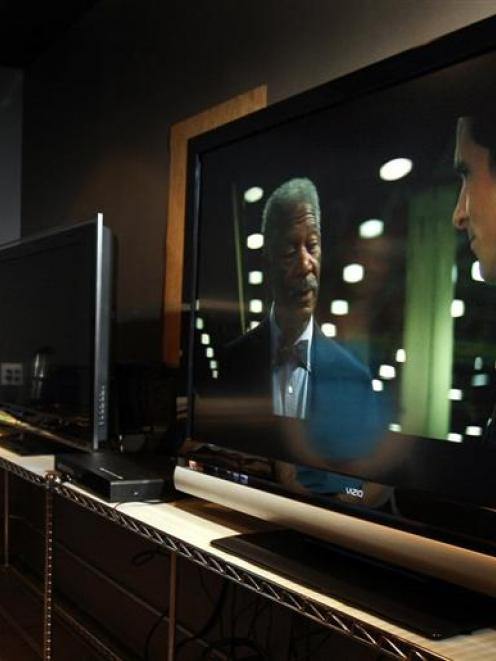 Laynie Allen Newsome, vice-president of sales, admires a 55-inch LED-backlit television at the Vizio test lab. Photo by The Los Angeles Times.
The future of television may be sitting in a laboratory in Irvine, California.

To illuminate images, these sets use light-emitting diodes behind the screen, resulting in TVs that can be thinner, brighter and more eco-friendly than other flat-panel models.

LED-backlit TVs - an evolution of the standard LCD set - have been on the market since 2004.

But the sets in this lab have something that could catapult the technology into the mainstream: a far lower price.

This lab is deep inside the headquarters of Vizio, a discount electronics company that became the biggest supplier of LCD TVs in North America through aggressive pricing. When it lowers prices, other manufacturers often must follow.

So far this year, LED-backlit televisions have accounted for less than 3% of world TV shipments from manufacturers, according to market researcher DisplaySearch. That is because they so recently came on the scene and usually cost at least twice as much as standard LCD sets.

Vizio's first LED-backlit set, which will hit the market in about a month, will be a 55-inch model priced at a relative bargain of about $US2000. Other manufacturers have LED-backlit sets in that size for about $US3500.

The adoption of big-screen LED-backlit sets probably will be slowed by economic hard times.

"Right now the sweet spot is 32-inch televisions, which can be found for $US500," DisplaySearch analyst Paul Gagnon said.

In the long run, the research group is bullish on LED-backlit TVs.

DisplaySearch predicts that by 2014, shipments of LED-backlit sets will surpass standard LCDs.

"The future is LED, there is no doubt about it," said Raymond Soneira, president of DisplayMate Technologies, which sells optimisation software for video displays.

The television manufacturing industry could use the boost a new technology can provide.

"When the industry went from analog to digital and from tube to flat-panel, it drove a lot of growth because it was very exciting," Mr Gagnon said. "That's what the industry needs - something to drive excitement."

LED-backlit TVs can put on a dramatic show. Samsung's 46-inch model is 3cm thick, giving it a startlingly thin profile.

The colours a LED-backlit TV displays can be turned brighter, making the sets stand out in a store.

But not all experts agree that the flashiness of LED-backlit sets is worth the extra money.

The LEDs use less energy and, perhaps more important, contain no mercury, unlike the fluorescent bulbs that light up standard LCD TVs.

It also is much more expensive. Sony has a 46-inch model that sells for about $US4000.

The industry is concentrating on white-light models, which also produce bright colours.

LG, Samsung and Toshiba have TVs using that technology on the market, and Sharp and Vizio sets are coming soon.

There are two other variations on LED-backlit TVs - direct and edgelit - that determine the thickness of the television sets.

Direct has the LEDs spread across the entire back of the screen. This type of illumination gives better image quality, experts say, but the sets end up nearly as thick as standard LCDs.

The edgelit models group the LEDs on the edges, allowing the sets to be very thin.

But quality can suffer.

"People will have their friends over to impress them."

Mr Soneira said most people watching television wouldn't be able to tell the difference between a perfectly adjusted LCD set with fluorescent backlighting and a set that uses LEDs.

But without LEDs, you would not be joining the future.

"With a standard LCD TV," he said, "there are no bragging rights."