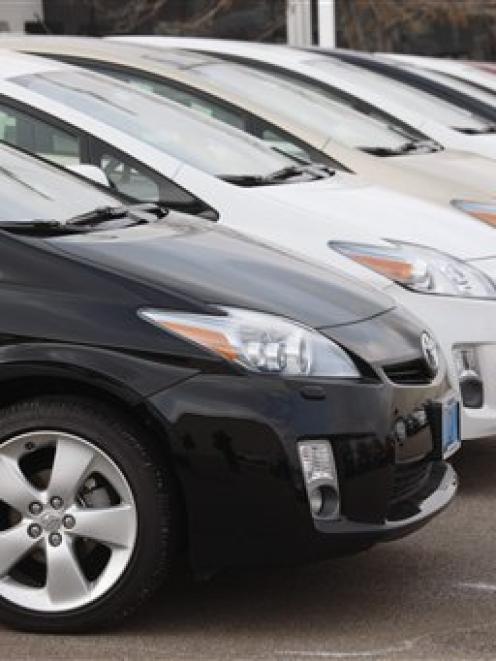 Gas-electric hybrids, propelled by electric motors at low speeds, are well-known for their quiet ride and great mileage. But their silence isn't always golden.

Some researchers and safety groups say that quiet operation - "hybrid creep" - can pose risks for unsuspecting pedestrians and the blind, who use sound cues.

Advocates for the blind have sought the addition of artificial noises in hybrids for several years, concerned that the expected sales growth of hybrids could lead to more pedestrian fatalities and injuries.

Hybrids account for about 2 percent of new car sales each year but auto companies are expected to boost production in advance of tougher fuel efficiency standards this decade.

"This is an example of too much of a good thing," said John Pare, executive director for strategic initiatives with the National Federation of the Blind. "Cars got quieter, that was good. Suddenly they got to be so quiet that it added an element of danger."

The government's auto safety agency said in a research report last year that hybrid vehicles are twice as likely to be involved in pedestrian crashes at low speeds compared with cars with conventional engines.

The study, by the National Highway Traffic Safety Administration, examined circumstances in which the vehicles were slowing down or coming to a stop, backing up or entering or departing a parking space.

More than 4300 pedestrians were killed in 2008, according to the most recent data available.

The government has been researching the safety risks that hybrids and electrics could pose for pedestrians, particularly the blind, along with the elderly and children, for vehicles traveling at 20 mph or less. When a car is going faster, the friction between the tire and the road's surface makes the vehicle louder.

The quiet hybrid phenomenon already has its place in pop culture. In an episode of NBC's The Office, paper salesman Andy Bernard uses his stealthy blue Toyota Prius to sneak up on Dwight Schrute and pin his bitter rival against a hedge.

One concerned co-worker, watching the unfolding drama, says "the Prius is silent if he keeps it under 5 miles per hour."

Congress is heeding the warnings, adding sound performance requirements for hybrids and electric cars to an auto safety bill being considered after the massive Toyota recalls.

Lawmakers could consider the changes this summer and car companies most likely would have to have the sounds ready to go three years after the release of new government rules.

Automakers helped develop the proposal in Congress and are moving forward with new artificial sounds that will be emitted from electric cars and future hybrid models.

Nissan has produced distinct sounds for the Leaf, the electric car expected to go on sale this year, when the vehicle accelerates or moves in reverse. When the Leaf speeds up to 20 mph, it automatically will use a soft whirring sound that changes pitch as the car accelerates. When the Leaf backs up, an intermittent bell will ring to warn those nearby.

The Japanese automaker consulted with acoustic psychologists and Hollywood sound designers to find a tone that addresses drivers, pedestrians and the community.

"It was kind of like peeling back an onion. The more we worked on it, the more issues came up, the more of a balancing act it became," said Andy Christensen, a manager with Nissan's North American Technical Centre near Detroit.

Nissan plans to use the sounds on the Infiniti M35 hybrid to be released in 2012.

General Motors wanted a more subtle chirp on its Chevrolet Volt, so it chose an alert horn that lets the driver warn an unknowing bystander.

"We didn't want to blast the horn at them and figuratively smack the people in the nose," said Doug Moore, a vehicle performance engineer for the Volt project. "We just wanted to tap them on the shoulder and say, 'Hey I'm here.'"

Other automakers are hard at work, too.

Toyota, which makes the top-selling Prius hybrid, is studying artificial sounds for hybrids when the vehicle is propelled by its electric motor at low speeds. Ford  is working to bring external sounds to future hybrids and electrics, including its Focus electric car, expected in 2011, and a next-generation hybrid and plug-in hybrid vehicle planned for 2012.

Nancy Gioia, Ford's director of global electrification, said car companies should consider standardising tones from future hybrids and electrics to avoid a cacophony of confusion on the streets.

"It can't be like cell phones where we all select our own sound and we tune out everybody else's but our own," Gioia said.

Some green car advocates have questioned the need for the extra tones and noted that the requirement could add more noise to neighborhoods. Paul Scott, vice president of Plug In America, said the sounds could help under certain circumstances, but drivers should have the right to activate the tones.

"After hearing how innocuous the Nissan Leaf sound is, maybe it'll be a minor irritant for us, but I suspect people will tire of it eventually and seek ways to disable the noise," Scott said in an email from Japan, where he was test-driving the car.

Les Blomberg, who is the founder of the Noise Pollution Clearinghouse, said reducing noise from the loudest vehicles, such as trucks, buses and motorcycles, would increase the ability of pedestrians to detect sound.

Adding sounds to hybrids, however, would simply enhance noise pollution and make it more difficult to hear an individual vehicle in traffic.