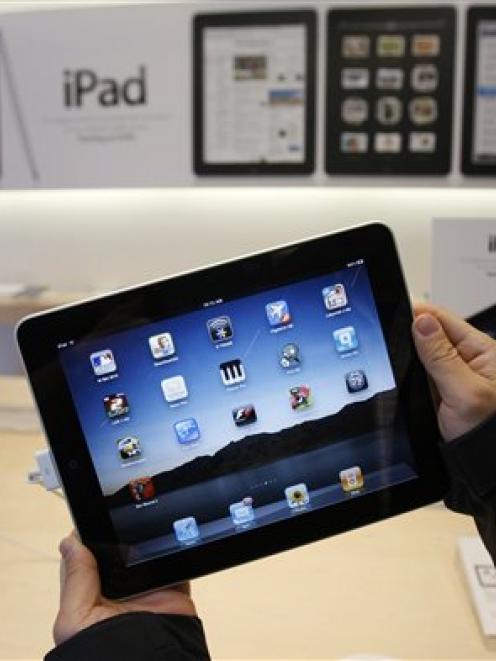 Apple's iPad. Photo by AP.
Companies are paying newspapers and magazines up to five times as much to place ads in their iPad applications as what similar advertising costs on regular websites.

This doesn't mean Apple's tablet computer will live up to its hype as a potential lifeline for the media industry. Online ads still generate a small fraction of news companies' advertising revenue, and it's an open question whether print ads will return to what they totaled before the recession.

But early evidence suggests the iPad is at least offering publishers a way to get more money out of advertisers. That bolsters the hope that portable touch-screen computers could start turning the economics of digital advertising in publishers' favour.

"I think it will redefine publishing and also redefine how advertisers connect with our audience," said Lou Cona, executive vice president at Conde Nast Media Group, the privately-held publisher of such magazines as Vogue, GQ and Wired.

Still, a lot will need to go right for publishers before the iPad and imitator tablet computers become a significant source of income.

For one thing, media applications will have to be compelling enough to keep people engaged for longer periods. That's especially true if a publisher wants to charge for a news app, because free articles on the web are just a few taps away on the iPad's browser.

Expect media companies to hold back more material from their free websites and offer it exclusively in tablet apps.

Also, tablet computers will have to get into many more readers' hands - but without becoming so mundane that advertisers are no longer willing to pay a premium for what now is rarefied space.

There are many reasons publishers don't make as much online as in print. While newspapers and magazines offer a limited supply of ad space - the number of pages they publish - space online is virtually limitless.

Advertisers that don't want to pay full price can give their money to online ad networks, which get discounted rates on slots publishers can't sell on their own.

That supply/demand equation hasn't played out yet on the iPad. In iPad applications such as USA Today's, there is a finite amount of space and no ad networks are in the mix.

And the app gives advertisers new possibilities. A reader can click on Courtyard by Marriott's USA Today ad and then, with a flick of a finger, scroll through images of the hotels' updated lobby design. Another tap and a high-definition video appears, full of happy hotel guests.

Jason Fulmines, director of mobile products for USA Today's corporate parent, Gannett,  says the newspaper is charging Marriott about $50 for every thousand times, or impressions, the ad appears. The average rate for USA Today's regular Web site is less than $10.

In the printed newspaper, the cost per thousand impressions on a full-page color ad that runs nationally is $103.

Fulmines declined to say how many impressions USA Today is promising on the iPad or how much ad revenue it projects from the iPad this year.

The newspaper's markup on iPad ads appears to be common. Phuc Truong, managing director of the mobile marketing company Mobext US, said publishers have been asking two to four times the usual rate of online advertising.

Aside from paying higher rates for each iPad ad, advertisers have been willing to increase their overall spending with a given publication.

That has been the case at The Wall Street Journal, said Brian Quinn, the Journal's vice president and general manager for digital ad sales.

"Out of the gate, there was an exuberance about this," he said.

There is no guarantee publishers can keep this going. For instance, one reason JPMorgan Chase & Co. leapt at the chance to sponsor The New York Times' app for the first 60 days was the opportunity to showcase its Sapphire credit card to early buyers of the device. That card is aimed at the top 15 percent of earners, and people who bought the iPad (for $499, at least) presumably have extra cash.

Chase is impressed by what it's seen on the iPad, but for reasons that cut both ways for publishers.

The good news, according to Chase Sapphire General Manager Sean O'Reilly, is that the company's ad is getting clicked on about 15 percent of the time that it pops up. Even if that's partly because people are fumbling with the touch-screen navigation, it's a surprisingly high figure; the average "click-though" rate for an online display ad is about one-tenth of a percentage point.

Put another way, 84 percent of people never click on a web ad in an average month, according to Gian Fulgoni, chairman of comScore, a company that analyses Internet behaviour.

The trouble is that some publishers hope the iPad will help break advertisers' addiction to concrete metrics like this.

Online, advertisers have been ruthless about seeing a return on their money. They have thrown out an industry maxim, "I waste half the money I spend on advertising, I just don't know which half."

Companies gather information on every step of the process, from the moment someone clicks on an ad to the point of purchase. They don't want to shell out for ads that don't pay off.

Publishers, on the other hand, want to return to the days when advertisers paid high prices for a big, eye-grabbing colour ad in a newspaper or magazine that readers spent a lot of time with.

That could require a new way of measuring how well ads work. Advertisers would have to agree to follow more complex measurements, such as new tools from comScore that don't just watch how many people click on an ad.

Instead comScore offers to show whether customers who have seen an ad then did a Google search for the product or bought it at a store. ComScore gathers such offline data by studying panels of web users and cross-referencing them with databases of say, loyalty card activity at a grocery store.

"The click is just not a metric that reflects the effectiveness of the advertising," Fulgoni said.

Among the other hopeful signs for publishers: The New York Times says 300,000 people had downloaded the newspaper's free app by mid-May.

Around that time Apple said it had sold about 1 million iPads since their April 3 debut, meaning more than a quarter of early iPad buyers were at least curious enough to take a look at the Times' app. (That percentage is likely to drop; Apple now says it has sold 2 million iPads.)

Wired might be the most aggressive magazine in trying to push the iPad's potential. Wired's app lets readers peruse the magazine the way they would in print, but with extra touches such as video clips or graphics that can be rotated with a finger swipe.

Nissan, which has a 30-second TV-style commercial for the Infiniti in Wired's first iPad edition, is one of nine advertisers that generally place spots in the print edition and are taking advantage of these bells and whistles in the tablet app.

Wired's app costs $4.99 per issue, which brings up another wild card: Whether publishers can balance methods of seeking revenue from readers and advertisers.

On the web most content is given away, in hopes of luring the widest possible audience for advertisers. Publishers are eager to avoid repeating that on tablets, but charging for apps carries its own risks. There might not be enough readers willing to pay, which would reduce the audience that can be sold to advertisers.

Wired says its first effort is working out. One week after the app went on sale, more than 66,000 people had paid for it.

In an average month, the printed magazine sells 82,000 copies on news stands.