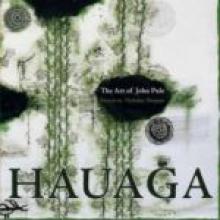 The standard of what might loosely be described as "art books" in this country has improved in recent years to the point where the best can stand comparison with any internationally.

By this I mean not just in technical quality of reproduction, presentation and so on, nor even the quality of the works being described (always a subjective matter) but especially by the standard of scholarship.

These two new locally originated publications bear out the point.

Each is highly creditable.

John Pule is not particularly well known in the South, but the opportunity to become familiar with his work will be able to be achieved early next year when the Dunedin Public Art Gallery exhibits the Wellington City Gallery's survey of his work, with which Nicholas Thomas' Hauaga is associated.

Pule is a Niuean-born New Zealander with a broad range of talents - he published a novel, The Shark That Ate the Sun, nearly 20 years ago - and a heritage of a very troubled upbringing and adolescence, some of which was spent in so-called "correction" institutions.

Somehow he found mentors who helped him reorganise his life - David Eggleton among them - and became first an onlooker, then a participant in Auckland's cultural life.

Tony Fomison encouraged his painting and, after a fuller realisation of his own Niuean culture, he began producing work which seemed to very freely combine elements of that and a particular narrative style, without descending into conventional Pacific imagery.

This work made an instant impression on the Auckland art world; Pule had "arrived", so to speak, and in just 20 years or so since his first exhibition has built a very solid reputation as one of our more innovative and exceptional painters.

Hauaga contains good reproductions of some of this work, and the illustrations are benefited by the essays, first by Nicholas Thomas, director of Cambridge University's museum of archaeology and anthropology, who has a special interest in Pule's work; second by an interview between Thomas and Pule; and third by a thoughtful reflection by Gregory O'Brien on the competing creative forces in the artist.

There is also a selection of Pule's writings, mostly poems.

The book is superbly designed and is a most valuable contribution to the literature of New Zealand art and artists.

Subterra is similarly a book associated with an exhibition, in this case Wayne Barrar's "An Expanding Subterra" at the Dunedin Public Art Gallery during the first half of this year.

The Christchurch-born artist is a photographer, and professor at the Massey University school of fine arts in Wellington.

Like Pule, his work has been exhibited only for the past 20-25 years, so he may also be considered a mid-career practitioner.

He is perhaps better known for his attention to the way we think, or may be led to think, about land use and location in a world in which personal freedom has become increasingly constrained by both corporate and governmental power operating "for our benefit and security".

Subterra looks at some aspects of this phenomenon, particularly, as the title suggests, what we have made underground.

David Pike's essay on his work refers to "the permanent fortification of the space beneath the earth", and photographic examples by Barrar range from the well-known site at Coober Pedy in Australia to elaborate facilities in the United States for the storage of data, nuclear facilities and mining; and to the underground power stations in New Zealand and Tasmania.

Barrar's pictures are judgemental only in the sense of the necessarily edited viewpoint: it's up to the viewer to work out possible interpretations.

Aaron Kreisler's essay talks of the "disturbing edge" to his pictures, and indeed they can be unsettling - is this because in some way the underground triggers our subconscious reference to the time when "mankind" sought refuge in caves from the terrors of the open landscape?

There's much here to think about in a volume that does credit to designer, artist, contributors and publisher - and at a bargain price for quality on this scale.

Bryan James is the books editor.