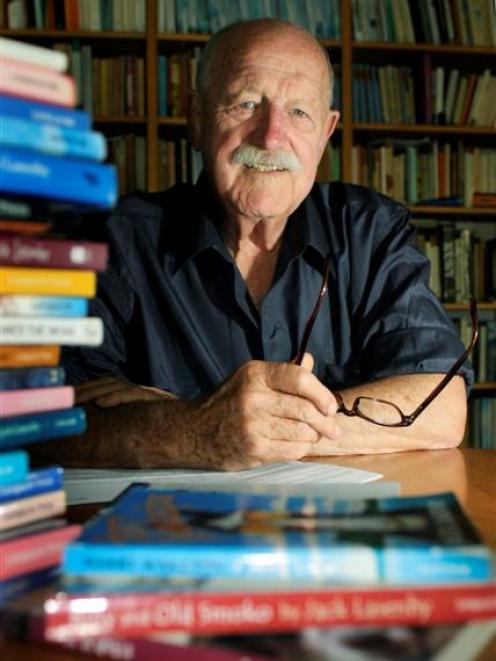 Childrens writer Jack Lasenby at home in Wellington. Photo by NZPA.
Giants of children's and young adult literature are joined by rising stars of the genre as they battle for the top award in this year's New Zealand Post Book Awards.

Alongside them are new talents chosen for their humour and creativity.

"The wide range of themes, places and times represented in this year's selection are a fantastic snapshot of who we are as Kiwis and as a nation," said NZ Post Book Awards judges' convenor, Bill Nagelkerke.

"There are rhyming stories that feature animals, humorous yet though-provoking contemporary fiction, stories that look forwards as well as backwards...science fiction, fantasy and realism."

The finalists were selected from more 130 submissions.

Along with the book of the year award, finalists will also be competing for the coveted Children's Choice Award, where children get to vote for their favourite read.

Voting can be carried out online at www.nzpostbookawards.co.nz or by using the special voting card available from books, schools or libraries.

Winners will be announced on May 20 at the Auckland Museum.

Every Second Friday, by Kiri Lightfoot, illustrated by Ben Galbraith.

* Non-fiction Back and Beyond: New Zealand Painting for the Young and Curious, by Gregory O'Brien.

The Crafting of Narnia: The Art, Creatures, and Weapons from Weta Workshop, by Paul Tobin and Daniel Falconer.

Enemy at the Gate, by Philippa Werry.

Five (and a bit) Days in the Life of Ozzie Kingsford, by Val Bird, illustrated by Rebecca Cundy.

Juno of Taris, by Fleur Beale.

The Tomorrow Code, by Brian Falkner.