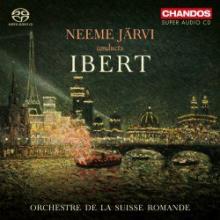 Another impressive "super audio" disc from Chandos comes to hand, the fourth album from Jarvi conducting the Suisse Romande and beautifully recorded in Geneva’s Victoria Hall. Featured are seven works by Jacques Ibert (1890-1962), a French composer mainly remembered today only for his Divertissement for chamber orchestra, composed in 1930 and often performed.

As this album shows, he has composed other exciting works of great appeal that also deserve concert play. In this and six other contrasting works, there is a fundamental lightness with strong melodic lines and exciting ostinato, even though there are stark contrasts in the compositions.

Divertissement was based on incidental music for a play, and is enchanting when properly played as it is here. Another standout item on the programme is Suite Symphonique "Paris" for chamber orchestra with its "Scenes Parisienne". I detected a feel of Stravinsky’s magic in the opening of his Rite of Spring in the start of three-part Escales (Ports of Call). The charming Sarabande pour Dulcinee was composed for the film Don Quichote (1933). Homage pour Mozart is an entertaining Rondo for orchestra, and Feerique (elfin or fairy-like) is a pleasure that shows some Debussy influences.

Other compelling items are a thrilling Ouverture de fete (celebrating 600 years of the Japanese empire) and Bacchanale (1950). The latter Scherzo for orchestra provides the very energetic conclusion to the disc, and was commissioned to celebrate both the 10th anniversary of the BBC’s Third Programme and the bicentenary of Mozart’s birth.

It made this listener wonder again why we don’t we hear more of such exciting orchestral items in the concert halls today.