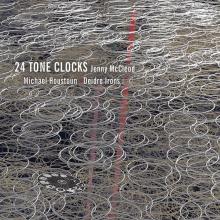 This set of music written by Jenny McLeod (awarded the New Zealand Order of Merit in 1997 as one of our gifted composers) was released on November 12, which happened to be her 75th birthday.

Seeing that Michael Houstoun and Diedre Irons, two of our renowned pianists, take turns at the keyboard, we are guaranteed good performances that enhance the music. The works are unusual.

Reading explanations in the booklet (just over 50 pages) may perplex — it’s a technical "commentary and memoir" by McLeod that might only be understood by music students, academics and other composers.  Best to dip straight into the 24 tracks of compositions (mostly about five minutes each) and not worry about the clock dial with its geometrical patterns and chromatic triads that the composer has in mind, fortunately mixed with her own "creative intuition".

You find little clashing modernism here but "conversations without words", sounds of invented birds (not the careful copying of Messiaen, with who she once studied), landscapes and even a sort of haka in No 3 of the tone clocks. They are usually enjoyable.

Some of the pieces have "enigmatic" titles that McLeod admits probably came from her "deep subconscious somewhere". Some were written for other NZ composers (Farquhar, Lilburn and Body); Landscape Prelude (No 18 tone clock) is based on a poem by Stephen Pledge, and No 12 is titled Meditation on Psalm 134.

Oddly, the booklet omits which pianist is playing the pieces. I am assured Houstoun plays tracks 1 to 6 and 19 to 24. Irons performs tracks 7 to 18.