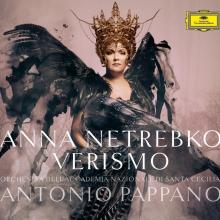 In opera, verismo (realism, from Italian vero, meaning ``true'') was a post-Romantic operatic tradition associated with Italian composers such as Mascagni, Leoncavallo, Giordano, Cilea and Puccini. The title of this disc, a long-awaited studio album (her first for three years) proclaims that the Russian-born diva is now prepared to top her glistening opera career over two decades by tackling many challenging roles from verismo works that require huge voice and great style. She began as a light lyric soprano, moved into bel canto, then Verdi and Puccini and recently even ventured into Wagner. Now she could certainly add many more roles to her repertire. Her new interpretations of some of the greatest arias of all time, sung stylishly, are well accompanied by the orchestra and chorus (conductor Antonio Pappano) and demand long applause.

Netrebko triumphed in New York's ``Met'' last season with completely sold-out performances in Il Trovatore. Here she displays even greater artistry, by displaying a voice that has reached a new and glorious maturity. She illuminates nearly a dozen roles that she has never played on stage. She brilliantly characterises the passionate and usually tragic characters in verismo opera: her Madam Butterfly is suitably aged by sorrow, Turandot is a commanding and impassioned figure: for her high C that tops that aria the soprano is joined by husband Yusif Eyvazov, a fine tenor and effective partner. He appears with her again in the final act of Puccini's Manon Lescaut to support it well.

Netrebko has reached the heart of the rich, mature, dramatic opera repertoire. She can showcase the sheer beauty of arias, with a wide range of colours. Emotive impact is combined with a distinct and loved timbre, setting her apart from other singers.