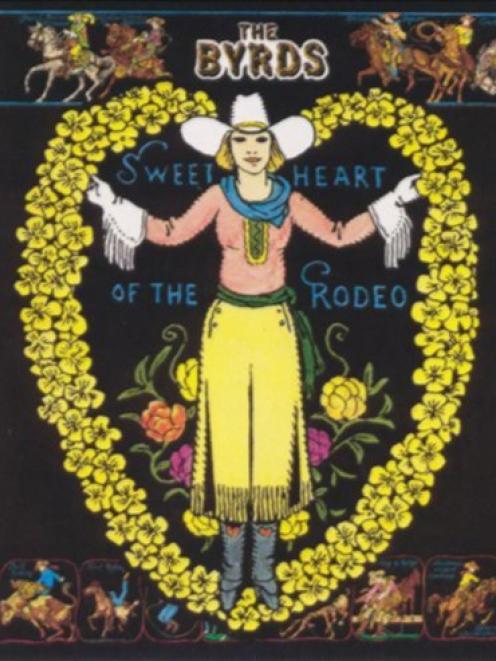 'Sweetheart Of The Rodeo'
By late 1967, much turn-turn-turning over of personnel had effectively reduced the Byrds to a duo, forcing founding members Roger McGuinn and Chris Hillman to look elsewhere for an answer to the band's declining popularity.

Enter Gram Parsons, a trust-fund kid and graduate of the folk music scene who had been exploring his new-found passion for country music with the little-known International Submarine Band.

Parsons was originally hired as a keyboard player but was encouraged further into the spotlight by McGuinn on the strength of his obvious talent and charisma.

Taking up rhythm guitar and vocals he immediately bonded with Hillman, who had bluegrass roots, and the strength of that union dissuaded McGuinn from following his planned course - a double-album history of American popular music.

The new direction would instead be country-rock, which on the face of it was little more likely to re-engage the band's fans than the original plan.

With no room for McGuinn's signature chiming 12-string, or for the swirling sitars of the recent psychedelic phase, this would be the Byrds as they had never sounded before.

Sweetheart Of The Rodeo polarised audiences on its release in August 1968. Confused longhairs regarded it as tantamount to betrayal and Nashville stalwarts dismissed it as soft-edged mimicry, while others hailed it as a brave marriage of pop and country.

Forty-five years on, all arguments still carry weight. McGuinn's faux-country twang on the Louvin Brothers' The Christian Life in particular can at best be read as naive, and despite Hillman's more direct delivery, tracks such traditional song I Am A Pilgrim fail to convey the depth of their history.

But in Parsons' songs, which preface his later work with Hillman in the Flying Burrito Brothers, something more substantial is present and through his short-lived contract with this major pop band he lends momentum to the wider exploration of traditional music by contemporary acts that continues to this day.