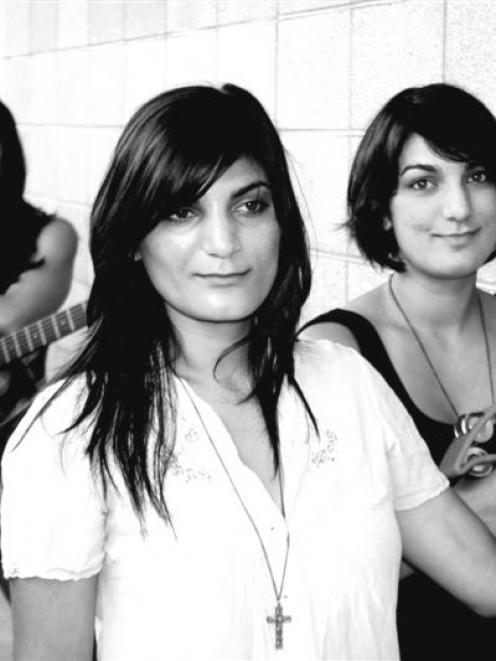 "They put posters up and everything: think it was our first proper headlining gig!" says Madeleine.

Priya adds: "I had to wear about 15 layers; it was the first winter I'd been in down south. I wore all my clothes at once."

The Auckland-based sisters have recently completed their debut album, Happy Heartbreak. Madeleine says, "Now we're sorting out our album release. We are doing it independently so there is a lot to do."

They're looking forward to getting on the road.

"Now we get to play a five-show tour ... which is really exciting! We've not done a nationwide tour before. I can't wait to get Japanese food. I think Dunedin has the best Japanese restaurants in NZ," says Anji.

The Sami Sisters play at Chick's Hotel on Saturday July 30.

The Rainbow club sandwich queer dance party plays out at 5b Buller St, in the industrial area from 9pm. The party is promoted as a queer-, trans-, gay- and bi-friendly space and a chance to celebrate diversity. Besides the headline acts, the show features DJs.

A spokeswoman for My,Oh. says they are "part asian and part caucasian" and not safe for work.

Manthyng's self-titled album is for sale on their website: manthyng.com.

• Giant steps
Hardened rockers I am Giant (left) are returning to New Zealand on their Horrifying Truth album release tour. Tickets for the shows are on sale at www.nztix.co.nz.

The Horrifying Truth will be released in New Zealand on August 1 by Sony Music.

The band's tour begins in Auckland on August 4, but the nearest the tour gets to Dunedin is a show at Revolver in Queenstown on August 17.