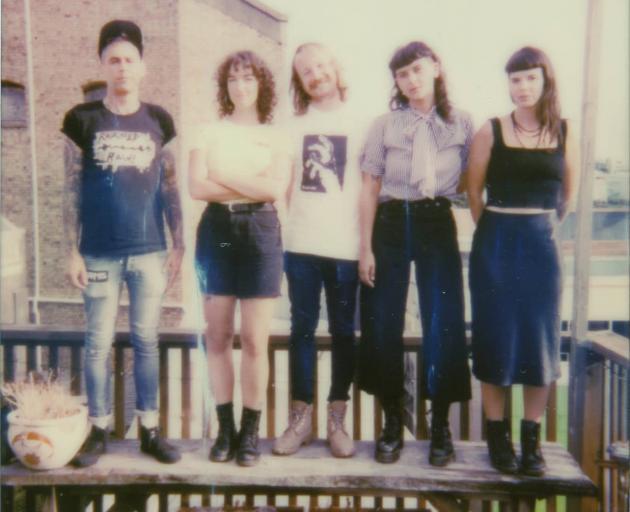 Auckland five-piece Dick Move is booked to play at The Crown Hotel on Saturday. PHOTO: SUPPLIED
Fans, performers and facilitators of live music are in for a tough few months as gigs are cancelled left, right and centre to reduce the community spread of Covid-19, writes Fraser Thompson.

The financial loss can’t be understated, but neither can the social impact. Nobody wants to worsen this crisis, but it’s during times like these when people really want to get together and support each other. It’s so frustrating.

Where things get a little blurry, though, are for the sort of underground gigs which usually attract audiences in the tens rather than hundreds. Will they be deemed low-risk enough to continue? Only time will tell. At the time of writing, Auckland punk five-piece Dick Move was about to embark on its first South Island tour, which would see them play the Crown Hotel next Saturday. I spoke to vocalist Lucy about touring during a pandemic.

You’re touring during a pretty interesting time. How is that going for you?

We’re kind of just taking it day-by-day at the moment like everyone else. I mean, obviously shows are cancelling, and venues are cancelling shows, so we’re kind of just keeping up with what's going on and if we have to make any changes then we’ll address that. But we’ve just decided to go with it until we know that we’ll definitely have to make changes. Just like everyone else, we’re in limbo at the moment.

It feels like a different world compared to now, but in January you opened for McLusky, which is pretty massive. How was that?

Yeah, that was so awesome, and they were the nicest guys I’ve met. They came down to Whammy Bar with us afterwards and hung out, which was really cool. But it was really great, it was like the first time we’d played on a big girl stage, before that we’d only really played at and around Whammy. And it was awesome, we were really quite surprised at how many people came early to watch us and support us and we were just kind of like, ‘‘Hello, it’s our first show supporting an international.’’ We didn’t really expect anyone to come down, but we had a big crowd and they all danced and it was really fun.

Unfortunately, we were meant to be playing last night with Lagwagon as well which was going to be our kind of second big international gig but that got cancelled.

So this is your first time playing in Dunedin?

Yeah, for sure. We haven’t actually gone to the South Island. I’m sure Justin has probably played down there before. Justin and Harriet, who are our guitarists, are very seasoned musicians and have been around the Auckland music scene for a long time in many bands.

Is that an interesting dynamic having super-experienced musicians and new ones?

Our focus is super-collaborative, so it’s very cool. Like Justin, for instance, he was in Shitripper and Master Blaster and he brings in influence from all those notorious punk bands. And then we’ve got Harriet, who is in Na Noise and Vincent H.L and BOZO and Dateline, she’s in many bands. So lots of different kinds of musical vibes that come into our songwriting process, which is really awesome, I think.

Anything else to add?

We’re like super, super pumped to come down whenever that is, and I’d just like to reiterate in this moment, in this up-and-down time, it’s such a good time to support small businesses and buy vinyl, merch and help out your venues. And if shows do get cancelled and you’ve got tickets you should consider donating that ticket money to the venue rather than asking for a refund, which is another thing that’s been flying around. But yeah, we’ll get through it together!