There is more than one story behind Tyler Kennedy Stent’s first solo exhibition, writes Tom McKinlay.

The paintings in Tyler Kennedy Stent's first solo exhibition tell stories with their eyes and their smiles, with the gestures that reach up and out from sketchy environments.

A young child sits in an uncertain reality that looks less than clean, holding an insubstantial blanket that seems unlikely to bring much comfort. An older child looks out from a claustrophobic maelstrom of paint. He's surrounded by black but there's an adjacent area of white too; perhaps hope or the future.

There are clearly stories here, but the truth of it is more remarkable still.

Many of the characters in Stent's exhibition are from Nepal, painted from photographs captured by a friend who was in the country following the catastrophic earthquake of 2015.

The photographer, Lachlan Bylhouwer, who Stent met while travelling in India last year, and with whom he remains in touch, subsequently travelled to Nepal where he not only photographed members of a Nepalese family caught up in the disaster, but also set about helping them. The watercolour and acrylic paintings, from the photographs, have become part of that humanitarian effort. It's art and story, and life.

While the exhibition is called ''The Spectator'' in reference to the way a traveller can often feel - somewhat removed from the everyday reality of those around them - neither Stent nor Bylhouwer are content to leave it there. 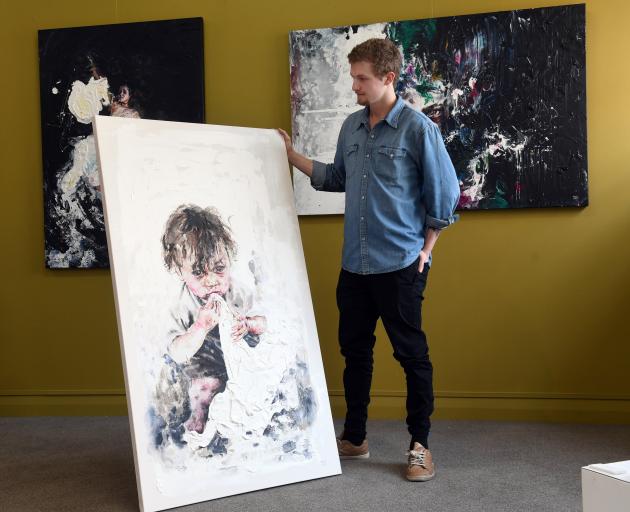 Tyler Kennedy Stent with a painting of one of the younger member’s of Mai-Lee’s family. Photo: Stephen Jaquiery

Mai-Lee, the mother of the Nepalese family, lost her husband in the quake, as well as her house, leaving her struggling to care for four children.

''When Lachlan met her, she was actually suffering from breast cancer, so it was kind of uncertain as to the whole state of the family. It was like everything was falling apart,'' Stent says.

So Lachlan, and some other travellers, banded together to build her a house from scratch.

''When he was telling me about this, it affected both of us in a huge way,'' Stent says.

''He would tell me about it, and I would be in Dunedin, a first-world country, and I would be worrying about petty dramas that really don't mean anything, during the day. Then I would talk to him at 3 o'clock in the morning, which was the morning for him in Nepal, and he would be telling me about this stuff and I would be blown away and utterly awed and quite humbled to paint these people.''

The good news is that Mai-Lee managed to get treatment for her cancer and is fine now, he says.

But life is still tough in Nepal, so proceeds from the paintings are going into an account to fund education for the children, most immediately for the eldest, Suzanne, who is 13.

While the portraits of the Nepalese family are striking even without the backstory, Stent says he has no interest in mere representations of handsome children.

''I like to say I don't paint portraits, I paint the emotion behind the portrait,'' he says.

Next year Stent and Lachlan plan to go back to Nepal - the next stage in ''Project Mai-Lee'' - to put the educational plans in place.

''I will get to meet them, which is going to be insane. And we will see what we can do for them at that point, with the money.''

He also hopes to direct further photography by Bylhouwer, which could contribute to another exhibition planned for February.

Stent was born in South Africa but raised in Auckland. He's only been in Dunedin this past year, having travelled down to be with his twin sister, who is studying neuroscience at the University of Otago.

While he has previously shown work, and been involved in group exhibitions, ''The Spectator'' is his first alone.

The strong narrative aspect to his paintings is no accident. The 20-year-old's first love was writing. He has written five books - the first when aged 8 - the latest of which forms part of his exhibition.

''I got to the stage of my life, in my last year at high school, where the ideas I was trying to present, I couldn't get them across in writing. I struggled with that, because writing and telling stories was like therapy. So I started painting and that presented the ideas that I didn't know how to say,'' Stent says.

''Most of my paintings tend to be illustrations to me.''

The book in the exhibition, of which there are only 30 copies, has 20 illustrations (edited down from 40), which help to tell a tale based on Dante's Divine Comedy. The paintings were done first, of his sister and ''some girls I used to know'', and given that a number feature women in white, underwater, they suggested a heavenly setting, Stent says. Hence Dante.

The story is about two girls who go to heaven, but on arrival find it is much less than advertised.

''I had done a whole lot of paintings beforehand and wanted to make a story out of the paintings. So I pieced the illustrations together, in the more chronological way that I saw, into a narrative.

''I was looking at religion with those paintings and it turned into a story.''

The paintings in the exhibition are the product of two months' of quite frantic work.

Stent ditched an apprenticeship at a tattoo parlour and work as a chef to dedicate his time to it.

''I was painting night and day; I was losing sleep over it,'' he says.

''It was good to see how many paintings I could put together in that amount of time.''