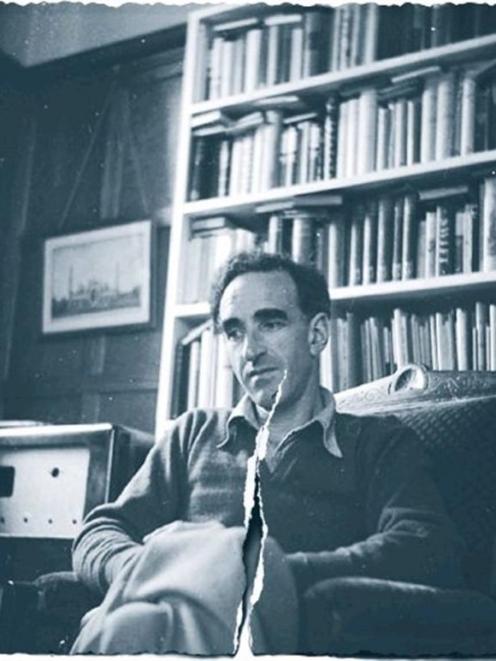 Few have contributed more to New Zealand arts and literature than Charles Brasch.

But, the Dunedin poet and philanthropist led a tortured life, according to his personal diaries, which are being transcribed for publication after a 30-year embargo.

Brasch insisted on the embargo, for 30 years after his death in 1973, for fear of embarrassing friends.

It was a mark of the man - cultured, loyal, learned.

Brasch still commands a fierce loyalty from friends. When researching this story, I asked Dunedin writer O. E. Middleton for his recollections of Brasch.

Middleton, who first met Brasch in 1951, said he was not prepared to talk to me about Brasch until I had read Enduring Legacy - Charles Brasch, Patron, Poet and Collector, edited by University of Otago special collections librarian Donald Kerr.

"Read the book and then you can quote me from that," Middleton said.

This is the quote I chose:"Much has been said and written about Charles Brasch, often by people with a particular agenda, sometimes by those who barely knew him," Middleton wrote.

"My own preference is for the testimony of someone who knew him well, his friend and fellow-poet Denis Glover: 'Charles Brasch was pure Damascus steel'."

She hopes to have the work published by Otago University Press, which published Brasch's Landfall magazine.

"The extraordinary thing about the diaries is they reveal how profoundly unhappy he was. It's been very painful reading. It's awful, really, to read about it," she says.

"His mother died when he was very young. He was left with a father he couldn't relate to. Charles was not the son his father wanted."

Mrs Scott met Brasch in 1949 through her husband, psychologist and mountaineer Dr Harry Scott, who was a close friend of Brasch and who died on Mt Cook in 1960.

"I was 19 when I met Charles. He was very influential in my life. He was amazingly valuable. But, he was unusual intellectually. He hadn't a hope of being a happy man. He was just too sensitive," Mrs Scott says.

"The crucial thing is, he turned out to be homosexual and he couldn't face that. Homosexuality was believed abnormal then and an unnatural thing to be. He struggled with that his whole life.

"He complained once about how horrible it is to be unloving and unloved. He found it difficult to put up with people. Everyone, in his eyes, had faults of one kind or another. He tended to be critical of people. Yet, people admired him and were very affectionate towards him. But, no-one was in love with him.

"It was not always easy to feel quite relaxed with Charles, because he was a bit prim, a bit Victorian, a bit limited in his experience of knock-about life. But he was wonderfully generous, thoughtful and intellectually substantial, and I came to love him dearly."

In her 2001 memoir, Recollecting Mansfield, Mrs Scott revealed she had a long, if complicated, sexual relationship with Brasch.

"What happened was that Charles and I slept together off and on for some years. He thought if he found the right woman then he could settle down and have a family. The diaries chronicle some of those long desperate efforts to get married to a woman. It's very painful," she says.

"He resisted the idea that he might be homosexual. He agreed that he was attracted to men as well as to women but he believed that this was 'normal' - superior normal, in fact - and that, as the ancient Greeks had maintained, men who were capable of responding to both sexes were the most highly developed of the species."

"They're full of discussions about people. Hundreds of people. Everyone who ever wrote him a letter, or wrote a poem, or painted a picture is discussed.

"There are dozens of diaries. The part we intend to publish covers 20 years and there are several diaries to each year."

He had returned from a trip to Europe in April, 1972, to discover he had cancer. In March, 1973, he was admitted to Wakari Hospital, suffering from Hodgkin's disease.

He returned to his Heriot Row home in May, dying there on the 20th.

"He had Ruth Dallas staying with him when he died. She went into his room one morning and he was dead. It just seemed wrong to me," Mrs Scott recalls.

"He'd been in Wakari Hospital and he had Hodgkin's disease, which was being treated and looked like it was getting better. I've never been satisfied that he died of that. I suspect he died of a lack of will to live. He had a profound unhappiness.

"He wrote a page in his diary that said: `Nothing I have ever written, or might still write, has been worth half the anguish that my life has been to me.'"I think he, somehow, just didn't choose to live.

"I always come back to the fact that his real passion was his work - New Zealand literature. That was his passion."

This year marks the 100th anniversary of Charles Brasch's birth - at 26 Tweed St, Littlebourne, on July 27, 1909 - and he is the focus of the four-day 2009 Dunedin Heritage Festival, which starts next Friday.

His influence on Otago and New Zealand culture can't be overstated.

Brasch's papers occupy 25 metres of shelving at the Hocken Library. His New Zealand art collection of 461 works is also in the library, while a glittering array of Egyptian artefacts he collected from Tel El-Amarna resides at Otago Museum.

His library of 7500 volumes is in the University of Otago library, which named the Charles Brasch Room after its benefactor.

Equally important was his championing of New Zealand artists, the likes of Toss Woollaston, Colin McCahon, Rita Angus, Ralph Hotere and dozens of others.

While hardly salacious in 2009, Brasch's sexual orientation has long been an open secret.

Some years ago, his literary executor, Alan Roddick, declined a request to publish some of Brasch's poems in an anthology of gay poets.

Mr Roddick agrees he was a complex man.

"He was a quiet, reserved person, who I think was difficult to get to know well, though I wouldn't say I knew him well. Possibly I got to know him better after his death than when he was alive," Mr Roddick says.

An anecdote told by Mr Roddick captures his passion for culture.

"He looked after his books enormously well. I remember on one occasion he'd lent me a book and I brought it back and gave it to him," Mr Roddick recalls.

"As we were standing talking about it, he was checking the spine and making sure it wasn't damaged and it's back wasn't broken. I was embarrassed. It was well looked after, but just automatically his impulse was to look after books."

One of the first people to study the diaries after the 30-year embargo was lifted was University of Otago 2003 Burns Fellow Dr Sarah Quigley.

"Although he formed several deep friendships, he remained a reserved and private person at the centre. Even his journals seemed to have been written to be read by other people," Dr Quigley says.

"Reading the journals is like, finally, you get the immediate voice, but I've been surprised reading these at how considered they are. That in itself is quite telling, in that he always seemed to keep some kind of guard up," she says.

"I think he was always a private person and he yearned to be close to somebody but he never was. He never really did completely merge his life with somebody, the way he hoped for when he was younger, and that's all there is to it."
• His own words

Brasch wrote one of his best-known poems, Winter Anemones, after writer Margaret Scott presented him with some flowers.

"Anemones were his favourite flower. I had a vase of them on the table and he said `Oh, if you want to remember me when I'm dead, buy anemones on my birthday'."

Mrs Scott still buys the flowers on Brasch's birthday on July 27 every year.

"The ruby and amethyst eyes of anemones
Glow through me, fiercer than stars.
Flambeaux of earth, their dyes
From age-lost generations burn

"Black soil, branches and mosses into light
That does not fail, though winter grip the rocks
To adamant. See, they come now
To lamp me through the inscrutable dusk
And down the catacombs of death."

He lived abroad for many years, working as a teacher in England, an archaeologist in Egypt and as a civil servant in wartime London.

He returned to New Zealand in 1946 and founded the influential literary quarterly Landfall in 1947, with friend and fellow-poet Denis Glover.

Like his great-grandfather, Bendix Hallenstein, and grandfather, Willi Fels, before him, Brasch was a generous benefactor, contributing to Otago Museum, the Hocken Collections, the University of Otago Library and the Dunedin Public Art Gallery.

He was involved in the establishment of the University of Otago Robert Burns, Frances Hodgkins and Mozart fellowships.

The University of Otago recognised Brasch's contribution as an editor, poet and patron of New Zealand culture by awarding him an honorary doctorate in 1963.

His Broad Bay crib was a home for writers and artists of the time: Frame, Sargeson, McCahon, Mason, Lilburn, Baxter and Glover.

When Brasch died he bequeathed the cottage to John and Anna Caselberg and it continues as an artists' retreat.

At the crib
Caselberg House will be open to visitors from 1pm to 4pm next Saturday. The house was Charles Brasch's crib and was willed to artist Anna and writer John Caselberg when he died in 1973. The Caselbergs died of cancer within six months of one another, in 2004. The Caselberg Trust was established to purchase the house as a retreat for artists. Artist Wayne Seyb and poet Alan Roddick will be among the guest speakers who talk from 3pm about the Caselbergs and their friendship with Brasch. Caselberg House is at 8 Gwyn Street, Broad Bay.