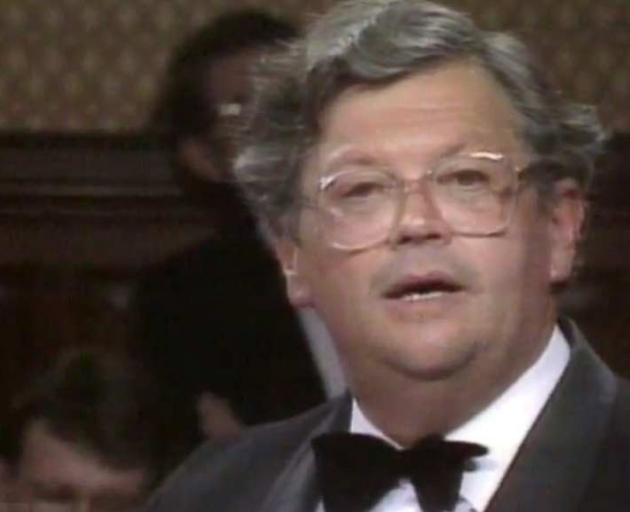 David Lange champions New Zealand's nuclear-free policy at the Oxford Union Debate, March 1, 1985. PHOTO: TVNZ
The Waihopai spy base was built during a turbulent time in New Zealand politics. Not only were domestic divisions beginning to break out into the open, but the Lange Government’s anti-nuclear stance had put it at odds with the United States, then still the Cold War champion of the free world.

It’s a much discussed period in the nation’s history, but a little remembered chapter from those times brings those elements together in a way that casts the relationship between New Zealand and the US in a harsher light.

In what is now an almost universally celebrated moment, in 1985 the newly elected Labour Government, with David Lange as Prime Minister, said no to visits by nuclear-armed US Navy vessels. Then, in 1987, Lange followed that up by declaring New Zealand nuclear free.

While all this was going on, a young National MP, Winston Peters, brought to light the fact that the Department of Maori Affairs had been trying to organise an unauthorised $600 million overseas loan for Maori development projects. The scandal caused divisions within the Labour Cabinet, stirred up racial tensions in New Zealand and arguably began a slide in support for the Government.

It was a messy affair and resulted in a reorganisation of State Maori agencies, but at the time, a 1987 TVNZ programme claimed a link between the loan scandal and CIA agents in Hawaii.

It carried echoes of an eerily similar episode in Australia from a decade earlier.

When Gough Whitlam became Australia’s Labor Prime Minister, in 1972, he abolished nuclear testing, shifted the country away from its close relationship with the United States and questioned the purpose of the US-Oz spy base at Pine Gap, near Alice Springs.

The CIA considered Whitlam a threat to Australia’s national security.

In late-1974, a finance broker with CIA connections talked two Labor MPs into signing up to a US$4 billion loan, from unofficial sources, to enable the government to buy back the country’s mineral resources.

Loan arrangements then stalled, details of the loan became public, a constitutional crisis grew and the Whitlam government lost the 1975 election.

Some say the New Zealand loan scandal was a set-up from the same CIA playbook — an attempt to destabilise a democratically elected government because it did not conform to the US vision of the world.

The 1987 TV programme’s allegations of CIA involvement were repeated and elaborated by a Peace Movement Aotearoa article printed later the same year.

More details have since been added, as recently as September this year — in a Covert Action magazine article co-authored by Murray Horton, organiser of the Campaign Against Foreign Control of Aotearoa (CAFCA), and a US-based researcher.

The article quotes a piece Bill Ralston wrote for the Listener in 2008, in which he says much of the loans affair information emanated "from a man subsequently identified as the head of the CIA headquarters in Hawaii [Eugene Welsch], who was operating under a commercial cover as a businessman".

Several of the businessmen who floated the loan worked for a CIA-front company called Bishop, Baldwin, Rewald, Dillingham & Wong — which acted on the instruction of Welsch, Horton writes.

The Weekend Mix asked Andrew Little, the Minister responsible for the GCSB and NZSIS, what he thought the spy scandal said about the value or danger of spy agencies.

"I think the CIA, and the history of the CIA, is its own thing — that is, the way the US conducts some of its foreign relations," Little said.

"But I think you can be assured, in a country of our size and nature, our security intelligence agencies aren’t involved in toppling sovereign governments.

"They are involved in gathering information that is relevant to our security interests, our economic interests and protecting New Zealand."

Indeed, with friends like those, who needs to make enemies.