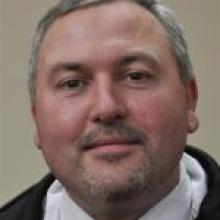 Guy Hedderwick
The vexed issue of the level of donations the Forsyth Barr Stadium has attracted may have to stay vexed, the matter complicated by various interpretations of the definition of "donation".

The matter has been controversial since early on in the project, when, in 2008, Dunedin Venues Management Ltd commercial manager Guy Hedderwick suggested just $30 had been received.

The matter was raised again at a recent Dunedin City Council finance, strategy and development meeting, and he then raised a figure of $330,000.

Asked recently to clear up the issue, he said that related to just one donation. Instead, the total of donations stood at $2.75 million.

"A couple of wealthy individuals in town" had provided substantial sums.

But in February, Carisbrook Stadium Trust (CST) chairman Malcolm Farry said he knew of two parties who had given $1 million each, but did not consider those donations. The issue of donations depended on the definition of a donation.

Asked this week if he could clear up the matter, Mr Farry said when the CST started the fundraising component of the project there wasn't any project, simply a vision.

"Even so, many people were prepared to support the concept, often noting that they were making a donation as they considered the concept would be outstanding for the future of the University of Otago, Dunedin and southern New Zealand."

He noted DVML has taken the total of private sector funding raised through the sale of seating packages and sponsorship towards $50 million.

"The CST never at any stage endeavoured to categorise the funds raised into any particular category - such as gift, donation, sponsorship, product purchase etc. Our concern was the total raised and we did not get distracted from that.

"As a Charitable Trust we complied with the appropriate legal requirements and had no need to produce definitions of various types of cash collection, especially with the changes in the law regarding funds paid to charitable trusts.

"I am aware that there are people who make silly claims about 'that's not a donation it's a sale of product', and I find it difficult to understand their motives."

"Call it what you will; it's money raised and congratulations are due to the people who stepped up and made it happen.

Those who were unwilling or unable to be a part of the private sector fundraising should not denigrate those who did, he said.

Mr Hedderwick said donations had already been included in the private sector funding total for the stadium, which stood at $42.8 million in August.