Anger over rabbit holes on Domain 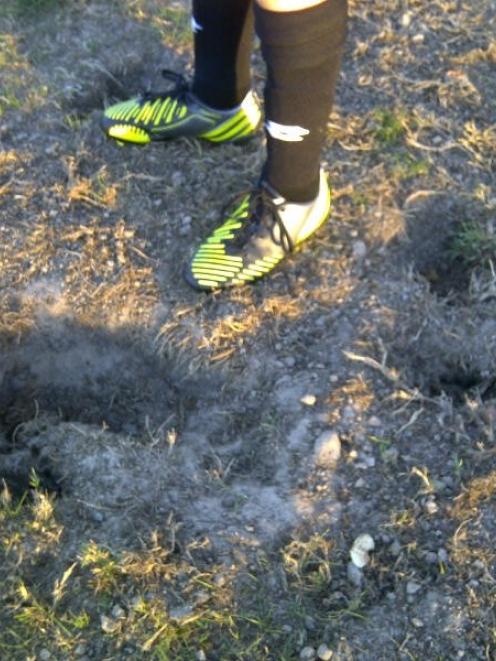 One of the rabbit holes in the middle of the Portobello Domain. Coaches and parents of the Hereweka Junior Football Club players are angry the ground is still in such bad condition only two days away from the start of the season. Supplied photo.
Coaches and parents of players at the Hereweka Junior Football Club are livid the Portobello Domain is still not in any condition for games to be played there, with the start of the season only two days away.

None of the Hereweka Junior teams have been scheduled to play at the ground this weekend.

A spokeswoman for FootballSouth said there had not been any instructions from the Dunedin City Council to move games away from the ground, and it was only by chance no games were to be played there this week.

As reported in The Star last month, the club was given assurances by the Dunedin City Council that the ground would be ready and prepared by the start of the season, after it had been damaged by rabbits during the summer.

Hereweka club spokesman Terry Hibbett said even though no games would be played at the domain this weekend, it would still need to be fixed up before the following weekend for games to be played.

Dunedin City Council parks manager Lisa Wheeler said the dry weather had meant any repairs to the ground had taken longer than usual.

''It's a sand carpet field and until there is some substantial rain it is hard to do all of the repair work needed,'' Ms Wheeler said.

Fertiliser, which stops rabbits from digging holes, had been laid and once there was enough moisture in the ground, the largest holes would be turfed over and refilled, she said.

All sports grounds in Dunedin were visited by contractors regularly but the council also had to look at prioritising grounds which got the most use, she said.